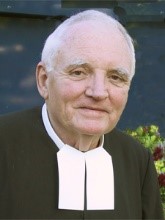 Brother DeSales Benning, FSC, of the District of San Francisco New Orleans, died on Saturday, June 25, 2016, in Napa, California. He was 79 years old.