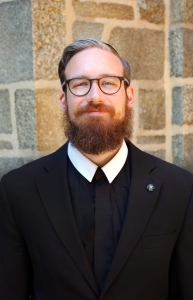 Brother Dylan Perry, associate director of the Lasallian Volunteers (LVs), was honored with the Distinguished Young Alumnus award during Christian Brothers University’s (CBU) fourth annual Bell Tower Gala on Saturday, November 14, 2015, at the Hilton Memphis. The gala was started as a means to pay tribute to the history of Lasallian education in Memphis.

Brother Dylan has served as associate director of Lasallian Volunteers since 2013 and is responsible for the well-being and formation of nearly 50 LVs each year who serve in Lasallian ministries around the country.

Perry earned his bachelor’s degree at CBU in Religion and Philosophy with minors in Peace Studies and Global Studies. While at CBU he served as a Senator for Student Government, helped start the Community Garden on campus, and interned with GrowMemphis at the Mid-South Peace and Justice Center. After graduation from CBU, he served as a Lasallian Vounteer at West Catholic High School in Philadelphia.

Perry earned a Master of Public Service from the University of Arkansas Clinton School of Public Service in 2013. As part of his studies he worked with Little Rock Urban Farming to create the Southern Center for Agroecology and Sustainable Food Systems, Soil for Life (in Cape Town, South Africa), and with the Arkansas Governor’s No Kid Hungry Campaign.

Read more about the gala here >