Lasallians from across the world gathered virtually to honor and celebrate Brother Gerard Rummery, FSC, who was recognized with the Brother John Johnston, FSC Award for his lifetime of service to the Lasallian mission. The Johnston Award is the highest honor given in the Lasallian Region of North America (RELAN). The virtual celebration took place Tuesday, April 6, 2021, 7:00 p.m. EDT / 4:00 p.m. PDT / Wednesday, April 7, 2021, 9:00 a.m. AEST / 11:00 a.m. NZST.

Established by the former Regional Education Board in 2009, the Johnston Award is now presented by the Lasallian Education Council (LEC). It was named in honor of Brother John, the 25th Superior General of the Brothers of the Christian Schools, for his uniquely significant lifetime contribution to the Lasallian mission. 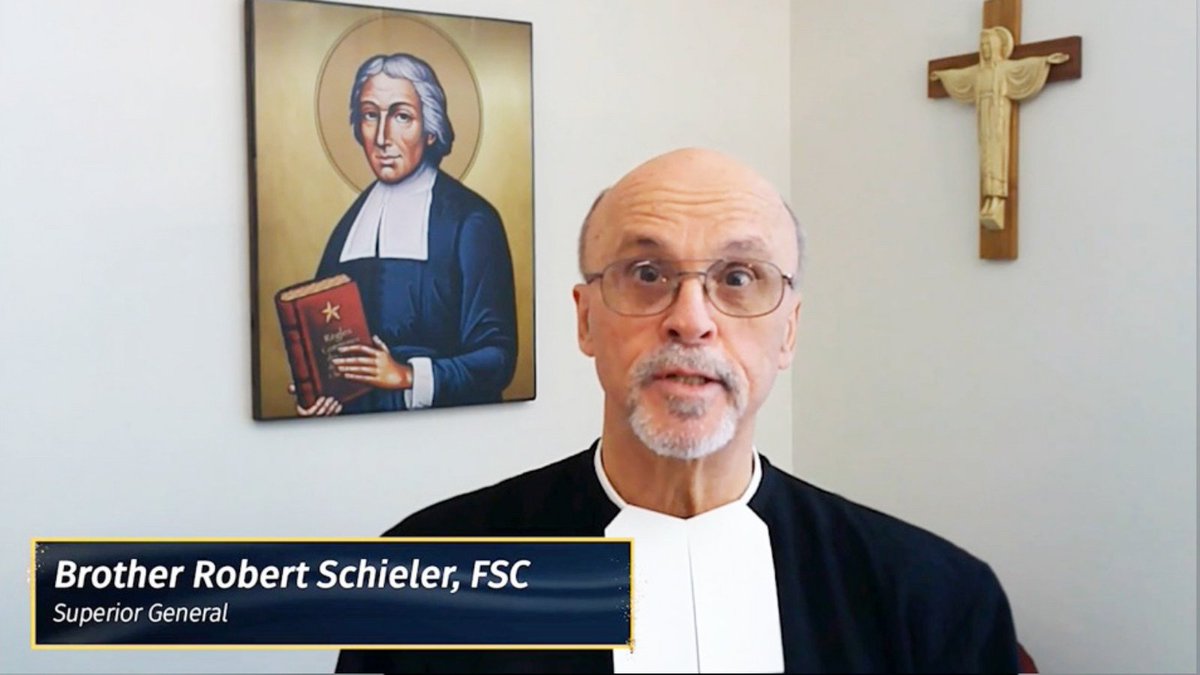 “We are so pleased to have had this opportunity to honor our teacher and mentor, Brother Gerard,” said Dr. Kurt Schackmuth, Lasallian Education Council (LEC) chair and vice president for mission at Lewis University, who hosted the virtual event. “His contributions to the Institute’s work are so very worthy of our recognition and gratitude. I also wish to thank all those who contributed so creatively and energetically to the success of this special ceremony.”

With Brother Robert presenting the award virtually, Brother David Hawke, FSC, Visitor of the District of Australia, New Zealand, Pakistan and Papua New Guinea (ANZPPNG), Brother Gerard’s home District, assisted with the physical presentation of the award and sat down with Brother Gerard to reflect on his Lasallian journey. 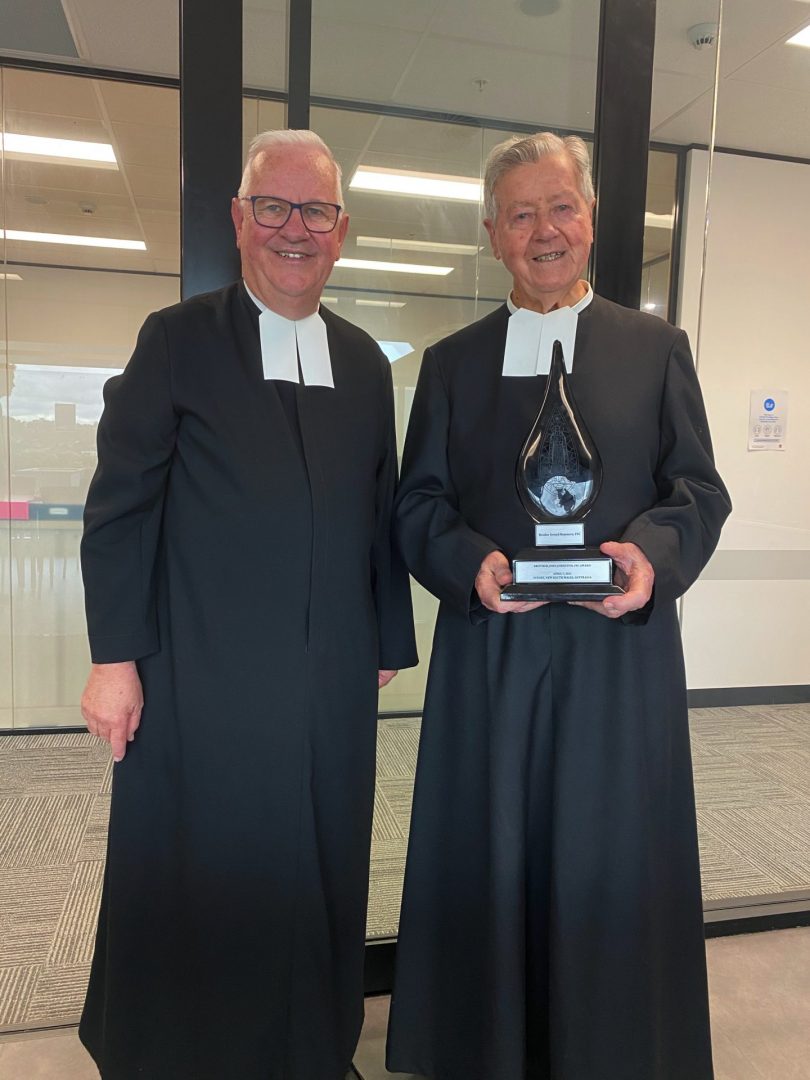 “I often refer to Brother Gerard as a Lasallian icon,” said Brother David. “His reception of the Johnston Award attests to this. The District of ANZPPNG is proud that one of our own has made such an exemplary contribution to the international Institute and appreciate that he has been honoured by RELAN.”

Among his many contributions specifically in RELAN, Brother Gerard was a founding presenter of the Buttimer Institute of Lasallian Studies and of the former Lasallian Leadership Institute.

“The invitation to teach the second year of the Buttimer Institute in USA from 1988-2006 became a joy, not a burden,” shared Brother Gerard. “From my first year with only Brothers as students, I taught increasing numbers of Lasallian women and men from whom my faith and commitment has been strengthened by their faith and dedication. Because of (the languages which I learned), I have absorbed so much Lasallian research myself that I always feel privileged to share it.”

Brother Timothy shared, “Brother Gerard’s loving retelling of the Lasallian story is a source of inspiration and a call to do the same in our own communities.”

The ceremony also included a compilation video of messages that Lasallians from around the world submitted to express their congratulations and share with Brother Gerard the impact he has had on their lives. 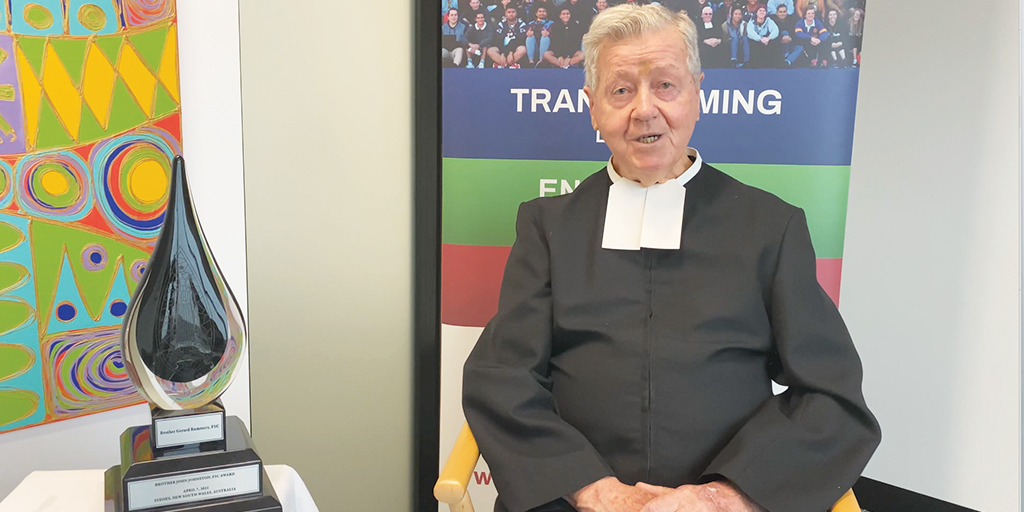 A Brother since 1947, Brother Gerard’s contributions to the Lasallian mission stretch far beyond his home District of ANZPPNG. He served two periods on the staff of the International Lasallian Center in Rome (1973, 1977-1982), which he directed from 1983-1986. He was twice elected to the General Council (1986-1993, 1993-2000), which were the same years Brother John served as Superior General. Brother Gerard is the author of the Institute’s official life of Brother John Johnston, many Lasallian articles in various journals and a number of other books, including the 2003 title Brothers to One Another, which shares stories of displaced Brothers in Czech, Slovakia, Hungary and Romania prior to 1989. Since his return to Australia after 2000, he has worked mainly with educators as a presenter for Lasallian Education Services, an adjunct professor at the Australian Catholic University and a presenter at the Broken Bay Theological Institute. Adapting to current COVID-19 restrictions, Brother Gerard has hosted multiple online sessions for Lasallians throughout PARC as well as around the world.

In RELAN, in addition to his significant contribution to Regional formation programs, Brother Gerard has generously given countless hours leading retreats, sharing presentations, participating in discussions and more to advance the mission. Brother Gerard attended the 2019 Huether Lasallian Conference to personally address the inaugural cohort of the Regional Formation Institute as well as to present the Johnston Award as a posthumous honor of his longtime friend and colleague Brother Jeffrey Calligan, FSC.

The Johnston Award recognizes Brothers and Lasallian Partners who, like Brother John, have endeavored on the international or Regional levels over the course of many years to advance the Institute’s mission to provide a human and Christian education to the young, especially the poor. It is presented to those whose leadership, teaching, evangelization or scholarly research and writing have borne witness to an abiding faith and zeal, and whose efforts have had a transformative impact upon the founding story as lived today. Previous distinguished recipients of the Johnston Award include: Brother Miguel Campos, FSC; Brother Luke Salm, FSC; Father Kenan Osborne, OFM; Brother Frederick Mueller, FSC; Brother William Mann, FSC; Brother Lawrence Goyette, FSC; Brother James Gaffney, FSC; Gery Short, AFSC; and Brother Jeffrey Calligan, FSC.