Brother James Miller Cause for Beatification Moves Ahead 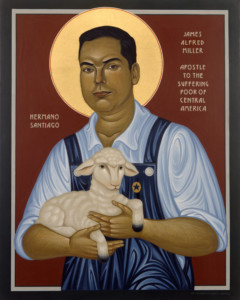 Pope Francis has recognized the martyrdom of De La Salle Christian Brother James “Santiago” Miller, FSC, who was killed February 13, 1982, in Huehuetenango, Guatemala. The Vatican announced on Thursday, November  8, 2018, that Pope Francis issued the decree which clears the way for Brother James’ beatification at a date and time to be announced.

Brother James was repairing a wall at the De La Salle Indian School when he was approached by three men, who shot and killed him. It is thought that he was killed because the Brothers were relentless in their efforts to keep the Indian boys from being conscripted into the military.

Brother James will be the first De La Salle Christian Brother from the United States to be beatified. The cause of beatification was undertaken by the Diocese of Huehuetenango, Guatemala, in 2009 and received the Decree of Validity in Rome in 2010 when Brother James was designated a Servant of God.

More from the Midwest District, including resources >