Brother James Miller to be Beatified on December 7

To watch the live stream of the Brother James Miller beatification ceremony, follow Colegio De La Salle Huehuetenango on Facebook. Follow the #BlessedBrotherJames on social media for highlights from the beatification. 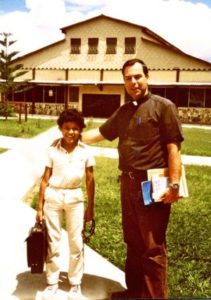 Brother James is pictured with a child in an undated photo in front of the Colegio De La Salle in Huehuetenango, Guatemala.

On November 8, 2018, the Vatican announced that Pope Francis approved a decree recognizing that Brother James died as a martyr, an important step in his cause for beatification. The process to declare him a martyr began in 2009. Brother James was repairing a school wall when he was approached by three men, who shot and killed him.

Brother Superior Robert Schieler, FSC, shared a message ahead of the beatification, writing “Brother James’ beatification is evidence that great things are possible through the ordinary activities of our ministry of human and Christian education. Brother James’ martyrdom calls us to witness to the Reign of God and, like so many others past and present, share the light of Christ no matter the cost.” Read the full message >

Brother Robert will be in attendance at the beatification, along with Brother Timothy Coldwell, FSC, General Councilor for the Lasallian Region of North America, Brother Michael Ferhenbach, FSC, Midwest District Visitor, Brother James’ sister Louise Shafranksi, Brothers, educators and administrators from around RELAN. When asked what she hopes her brother will be remembered for, Shafranksi told De La Salle Today, “The one thing I hope people take away is that Jim was a real person. He was a son, brother, Christian Brother and friend. He had a hearty laugh, a ready smile, a quick wit, a good sense of humor, and was a genuine, hard-working person. He was a man who felt happiness and sorrow, had great love for both family and the Church. He loved working with his hands, and was, through and through, a little farm boy at heart.” Read the extended interview from De La Salle Today > 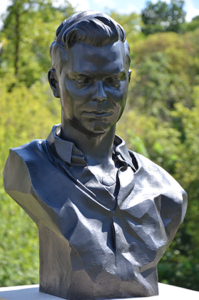 A bronze bust of Brother James that sits in the courtyard of Cretin-Derham Hall in St. Paul, Minnesota.

During the celebration in Huehuetenango, Brother Michael and Brother Alberto Mairena Floripe, FSC, Central America-Panama District Visitor, will be presented with Signum Fidei Award of Saint Mary’s University of Minnesota. The award is being given in recognition of Brother James and his ministry in both the Midwest and Central American provinces. Read more >

Other celebrations have been planned to photo Brother James. In the Midwest District, Brother James’ alma mater of Saint Mary’s University of Minnesota has invited the public attend a celebration Mass at Saint Thomas More Chapel in Winona followed by a reception in the Science and Learning Center. Cretin-Derham Hall in St. Paul, Minnesota, where Brother James taught, continues to honor his legacy through daily prayer and volunteer work. The La Salle Retreat Center in Wildwood, Missouri, where Brother James worked and studied, will host an open house on Monday, December 9 in celebration of the beatification. A rosary will be prayed at 9:00 a.m. followed by a presentation from Brother Alan Parham, FSC. The center will be open for tours from 8:30 a.m.- 4:30 p.m. Visitors are welcome to explore the spaces where he worked and studied while living there.

The Catholic Spirit, “A saint of their own: Cretin-Derham Hall prepares for Brother James Miller’s beatification,” Christiana Capecchi, November 22, 2019