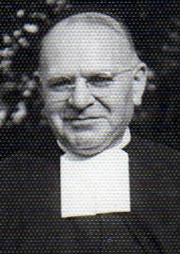 Brother Juanito (Brother Bernard-Philippe Fromental Cayoche) is now Venerable, after his decree on “heroic virtues” was signed July 5, 2013. His Cause began in Mexico City on August 2, 1995. A miracle, examined and approved, will lead Venerable Bro. Juanito to beatification.

Bro. Juanito was born in 1895 in France and was drawn to the Institute of the Brothers of the Christian Schools because of his desire to be a missionary. While in formation in Spain, he met Brother Miguel Febres Cordero, the future Saint Miguel. After serving at a school in Cuba for several years, he arrived in Mexico City in 1925 where he served for 27 years. Bro. Juanito is credited with founding the religious Congregation of Sisters (Hermanas Guadalupanas De La Salle), to whom he gave the Rule and the spirit of faith and zeal, characteristic of the Brothers of the Christian Schools.