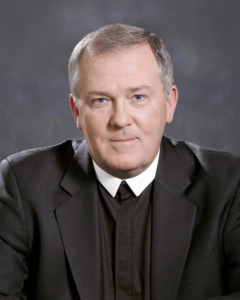 Brother William Mann, FSC, will end his service as president of Saint Mary’s University of Minnesota in May 2018. Brother William, who has led Saint Mary’s for nearly 10 years, announced his decision in a letter to faculty, staff, students and alumni.

Prior to becoming president, Brother William served on Saint Mary’s board of trustees from 1996-2001, and spent almost 30 years in leadership roles with the Institute of the Brothers of the Christian Schools, including serving as Vicar General from 2000 – 2007, the second highest role in the Institute. He joined the Brothers in 1965 and served as a teacher at schools in New York and Rhode Island.

Brother William is a longtime presenter of the Lasallian Spirituality course in the Buttimer Institute of Lasallian Studies, a formation program of the Office for Lasallian Education at Christian Brothers Conference. He served on the advisory board that developed the first Buttimer Institute in the mid-1980s and began teaching in the late 80s.

In the letter, Brother William, who recently turned 70, wrote about his interest in returning to the District of Eastern North America, his home District, after only having lived there for about five years since 1984. He also outlined some of the positive outcomes of Saint Mary’s strategic plan along the lines of science, graduate online, mission and identity, and philanthropy, including opening a new science facility in 2017, starting a collaboration with the Mayo Clinic School of Health Sciences, beginning a First Generation Initiative, launching the International Symposium on Lasallian Research, and increasing fundraising from an average of $4.5 million annually to more than $55 million over the past four years.

The Saint Mary’s University board of trustees will begin the process of identifying his successor.