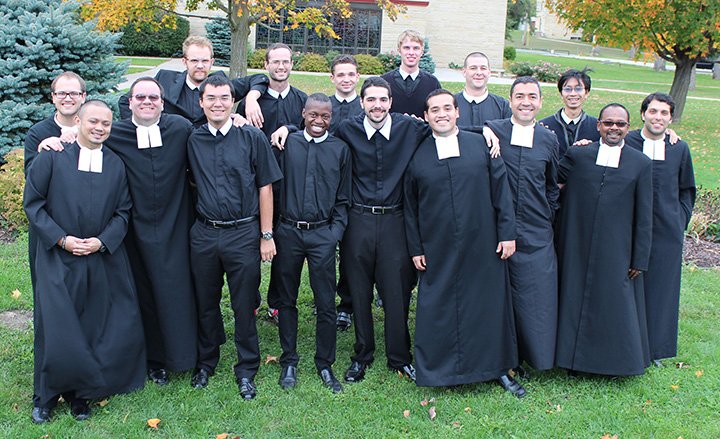 “With so many of us present, you can feel this palpable energy in the air. It’s revitalizing, hope-giving. These are the men who I will be journeying with, and that future looks bright,” said Brother Patrick Martin, FSC, a novice from the District of San Francisco, about the recent Brothers in Initial Formation Gathering.

The gathering, which included De La Salle Christian Brothers in various stages of initial formation in the Lasallian Region of North America (RELAN), took place October 11 – 13 at Saint Mary’s University of Minnesota (SMU) in Winona. These gatherings, which typically happen twice a year, are opportunities for Brothers to connect on a Regional level and get to know each other. Ample time is provided for Brothers to talk in casual settings in order to build bonds that stretch beyond their individual Districts.

“There was this sense of community present among all of us, that we were a close-knit family even on the Regional scale,” said Brother Anthony Elfering, FSC, a novice from the Midwest District. 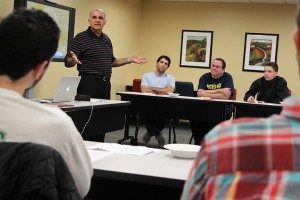 Brother Armand Alcazar during his session

That sense of community surrounded the Brothers as they journeyed through a weekend of activities around the theme The Brother as Catechist. Brother Armand Alcazar, FSC, gave a lively presentation on the subject and encouraged Brothers to be prophets regardless of the subject they teach. Other activities included a campus tour, a social and dinner with Brothers at SMU, and a visit to Saint Mary’s Press.

The Brothers also took time to share their ideas for fostering vocations – ideas that were brought to the meeting of the Regional Vocation Formation Council (RVFC) that followed the gathering.

“With the number of us doubling in five years, it gives us momentum for vocation promotion,” said Brother David Deradoorian, FSC, a novice from the District of Eastern North America (DENA).

The novices described the gathering as a way for Brothers in initial formation to support and encourage each other. They see it as a way they are fulfilling a call by Superior General Álvaro Rodríguez Echeverría, FSC, to be “Brothers without Borders.”

“After just a year with the Brothers, I feel I have gotten to know these young men better, and I feel that the better I know them, the more we fit together as a group,” said Brother Johnathon Emanuelson, FSC, a postulant from the Midwest District living at the Regional Postulancy at Jeremy House in Philadelphia and teaching at West Philadelphia Catholic Preparatory High School. “I feel a deepening sense of my vocation knowing that these are the men I might share my vocation with, and who will be with me for many years in the future.”

“Seeing other Young Brothers on fire with the faith and zeal for the mission brought me such joy,” said Brother Mark Engelmeyer, a postulant from the Midwest District serving at Christian Brothers High School in Memphis, TN, as a teacher and campus minister.