Brothers in Initial Formation Retreat: ‘Being Brother in the Young Church Today’ 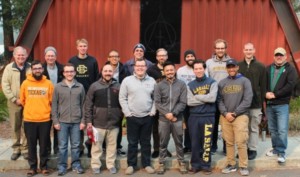 The District of San Francisco New Orleans (SFNO) hosted the Brothers in Initial Formation retreat November 8-11, 2018, at Saint Joseph’s Camp on the Russian River in Duncans Mills, California. The retreat theme was “Being Brother in the Young Church Today” and was facilitated by Charles Legendre, AFSC, SFNO director of evangelization and catechesis. 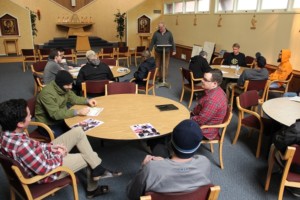 The retreat was organized into three movements: examining three models of faith development; exploring the religious faith and spiritual practices of young people today through the Brothers’ experience with their own students, Lasallian Reflection 2: One Call, Many Voices, and the Saint Mary’s Press study, Going, Going, Gone; and considering ways of listening and dialogue as effective responses to the spiritual needs of young people today.

The gathering also provided its participants with ample opportunities for prayer, reflection and fraternal dialogue.

The purpose of the Initial Formation Retreats is to develop among those Brothers fraternal and social support, provide input and education on topics central to their personal and professional growth, and encourage ongoing dialogue and processing around their experiences. This accompaniment serves the Brothers in initial formation as they deepen their vocation as De La Salle Christian Brothers in the Church.