This year’s Buttimer Institute of Lasallian Studies took place June 24 – July 7 at Manhattan College in Riverdale, New York, with 40 participants in Buttimer I, 35 in Buttimer II and 32 in Buttimer III. Buttimer brings together participants for two weeks each summer for three consecutive summers to study the life and work of Saint John Baptist de La Salle and the origins of the Lasallian mission. 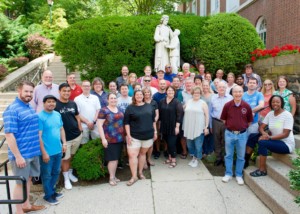 ”The Buttimer Institute provides an opportunity to take a deep dive into the life and mission of our Founder while forming meaningful relationships with Christian Brothers and Lasallian laypersons all over the world,” said Tom Brotherson, a Buttimer I participant and an educator at Mullen High School in Denver, Colorado. “I am very fortunate to be a part of this program.”

Brotherson also commented on what he learned about the Founder, saying, “I was deeply affected by the amount of challenges that Saint La Salle faced while establishing the Institute of the Brothers of the Christian Schools. His perseverance in the face of adversity and his dedication to educating young people are inspiring.”

Buttimer II participant Colleen Dunne, director of Campus Ministry at Saint Mary’s University of Minnesota in Winona, called it an “incredible experience” to gather with participants from different countries, types of institutions and roles who are excited about the Lasallian mission. 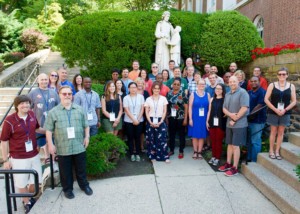 “The energy of the participants to share their own stories and the stories of what they do in their schools and universities is inspiring,” said Dunne. “This group also took to heart the relational aspect of Lasallian ministry by investing in one another during our time together and supporting each other’s learning, affirming experiences, and giving encouragement for the work ahead. The greatest blessing of the second year class is the community we have formed with one another that goes beyond our two weeks in New York.”

Every year, Buttimer attracts an international audience. Some of the countries represented at this year’s gathering included New Zealand, South Africa, Kenya, Papua New Guinea, Singapore, Nigeria and Pakistan. Rana Brogan, traveled from Victoria, Australia, where she is deputy principal of Faith and Mission at De La Salle College in, to complete her second year of the Buttimer Institute.

“The energy of the program and participants is electric!” Brogan commented. “It is a collective energy that is creative, inspiring and committed to keeping alive the story of Saint John Baptist de La Salle and Lasallian education. It is amazing the connections you build globally with fellow Lasallians and the sense of family, community and Lasallian spirit that develops so quickly in such a short amount of time.” 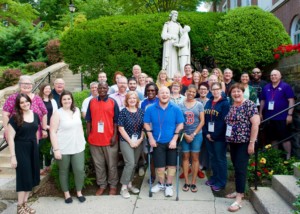 Matt Michaud, associate principal for academics and student affairs at La Salle Institute in Troy, New York, completed his final year at Buttimer and shared, “The last three years has been transformational, I can honestly say that my life is forever changed because of the experience of Buttimer. There was a common theme that became increasingly more prevalent for me as Buttimer pressed on. What occurred as a result was a clarity and resulting peace that filled my heart. An amazing thing happens to you when you realize exactly what you were born to do.”

This is the second year in a row that Buttimer was held at Manhattan College, where it first took place in 1984. Prior to last year, Buttimer took place at Saint Mary’s College of California in Moraga for 25 years.

Buttimer, a program of the Office for Lasallian Education at Christian Brothers Conference, is named in honor of Brother Charles Henry Buttimer, FSC, (1909-1982), the first American Superior General of the Brothers of the Christian Schools (1966-1976).