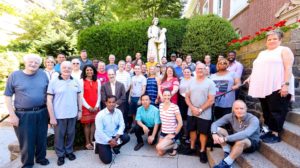 Lasallians from all over the world traveled to Manhattan College in Riverdale, New York, June 24 – July 6, 2019, to participate in the Buttimer Institute of Lasallian Studies. The program, which takes place for two weeks over three summers, provides time to study the life and work of Saint John Baptist de La Salle and the origins of the Lasallian mission. The intensive formation program also provides an opportunity for classmates to live in community.

Michael Scaramuzzo, campus minister at Saint John Paul II Academy in Boca Raton, Florida, attended Buttimer I, which offers a detailed study of the life and person of Saint John Baptist de La Salle and the historical and ecclesial context of the time in which he lived, reflected on what affected him the most. “The piece of the Founder’s story that impacted me the most was learning about how much adversity the Founder had to overcome in his mission creating the Institute. De La Salle never gave up and overcame such great obstacles. The impact that will have on me in my ministry inspires me to never give up despite obstacles. Buttimer has an almost a nurturing energy—you really feel the spirit of the Institute.” 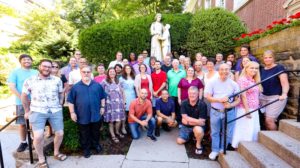 Buttimer provides participants an opportunity to reignite their passion for the mission and the students entrusted to their care. “Words cannot describe the experience you receive at Buttimer. It’s more than a learning experience. It is a joyful feeling, a spark of passion, and a family-forming community. You leave feeling on fire to return to your ministry,” said Shannon Denton, a teacher at Christian Brothers School in New Orleans, Louisiana, and Buttimer II participant.

All four Districts in the Lasallian Region of North America (RELAN) were represented at this year’s Buttimer, as well as global locations such as Australia, Singapore, Ethiopia, New Zealand, Pakistan, South Africa, Hong Kong, the United Kingdom and Kenya. “I learned and experienced how far reaching the Lasallian community is throughout the world.” continued Denton. “Through participating in Buttimer, I have made friends around the world working for the same mission.”

Much of Buttimer has to do with both the connections the participants make amongst each other and with the Founder and his story. “Buttimer was an amazing experience for me! I had the opportunity to collaborate with Lasallian educators from around the world. I learned so much about the life of De La Salle, how to incorporate pedagogical practices into my curriculum that will benefit prospective teachers, and how important interior prayer and spirituality was to De La Salle and the Brothers. Most of all, I will never forget the connections I have made with other fellow Lasallians who are now family to me!” said Erica Kwiatkowski-Egizio, associate professor at Lewis University in Romeoville, Illinois and Buttimer III participant.

This year’s Buttimer Institute took place with 41 participants in Buttimer I, 39 in Buttimer II and 34 in Buttimer III. Buttimer, a program of the Office for Lasallian Education at Christian Brothers Conference, began in 1984, and is named in honor of Brother Charles Henry Buttimer, FSC, (1909-1982), the first American Superior General of the Brothers of the Christian Schools (1966-1976).