This year’s Buttimer Institute of Lasallian Studies took place June 25 – July 8 at Manhattan College in Riverdale, New York, with 40 participants in Buttimer I, 36 in Buttimer II and 26 in Buttimer III. Buttimer brings together participants for two weeks each summer for three consecutive summers to study the life and work of Saint John Baptist de La Salle and the origins of the Lasallian mission. 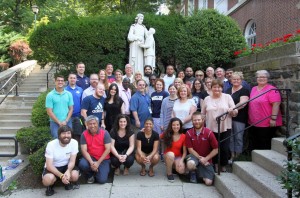 Lauren Lamonaca-Bada, a physics teacher from De La Salle College “Oaklands” in Toronto, and a Buttimer II participant, described her experience. “This program is life-changing. You enter the program with your own expectations, and each year the program supersedes those expectations. You will truly be changed by the topics you will be taught, the teachers that teach you, the people you meet, and the community that is built at the Buttimer Institute.”

The Buttimer Institute, held at Saint Mary’s College of California in Moraga for the last 25 years, returned to its roots this year by being held at Manhattan College, where it first took place in 1984. Lamonaca-Bada enjoyed the change. “The new venue breathed new energy into the program!” 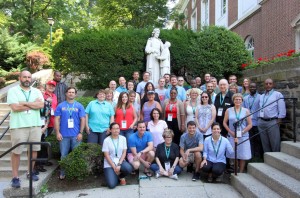 Dave Miliotis, director of human resources at Saint Mary’s University of Minnesota in Winona, and a Buttimer I participant, found that Buttimer provided him with a new appreciation for Saint John Baptist de La Salle. “De La Salle’s astonishing perseverance and trust in God’s providence in the face of overwhelming obstacles (affected me). His letters to the Brothers, which provided a direct and personal experience of De La Salle for me, felt like they were written directly to me.” 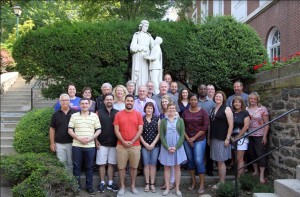 Every year, Buttimer attracts participants from around the globe, and this year was no exception. The countries outside of RELAN represented included: Jamaica, Ethiopia, Kenya, Nigeria, South Africa, Papua New Guinea, Benin, the Democratic Republic of the Congo, Pakistan, New Zealand, Australia, Hong Kong and Singapore.

Father LaSalle Hallissey, O.P., the chaplain at De La Salle High School in Concord, California, and Buttimer III participant, appreciated the international attendees presence. “My biggest take-away from my Buttimer experience is the lived reality and vitality of the Lasallian vision around the world. It was an amazing thing to talk with folks especially from the land down under and the Brothers from Africa and see how they are living the Lasallian charism in new and creative ways, ways that so often dovetail with current best practices in California.”

Buttimer, a program of the Office for Lasallian Education at Christian Brothers Conference, is named in honor of Brother Charles Henry Buttimer (1909-1982), the first American Superior General of the Brothers of the Christian Schools (1966-1976).

Learn more about Buttimer >
See pictures from Buttimer >
Read about the beginnings of Buttimer in an AXIS  article by Brother William Mann, FSC >