Buttimer Experiences Community Back in Person 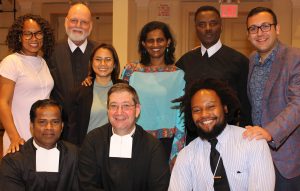 Lasallians gathered at Manhattan College in Riverdale, New York, from June 26 – July 9, 2022, to participate in the Buttimer Institute of Lasallian Studies. This was the first in-person Buttimer experience since 2019. Informal virtual programming kept participants connected during pandemic when in-person gatherings were not possible. The program takes place for two weeks over three summers and provides time to study the life and work of Saint John Baptist de La Salle and the origins of the Lasallian mission.

The two-week intensive formation program allows participants to cultivate and build up the greater Lasallian community through daily prayer, classes, reading time and socials. Students also participate in a co-curricular practicum of their choosing to meet with throughout their three years of study. The practicum allows students to gather across the three Buttimer classes based on an area of Lasallian interest, including Lasallian Mission Coordinators/Animators, Lasallian Presentation Resources, Lasallian Research, Young Lasallians and Lasallian Association.

“Living in community for two weeks, engaging in rich prayer experiences, meeting the Brothers, networking with a wide variety of educators, reading lots and learning considerably, and socializing in a fantastic city made this a formidable and memorable experience,” shared first-year Anne Marie Tirpak, president of De La Salle Institute in Chicago.

Buttimer I, consisting of 26 students, began the program with the founding story, detailing the life and person of De La Salle. Contextualized by the time in which he lived, students learned about the early days in the history of the Institute of the Brothers of the Christian Schools. 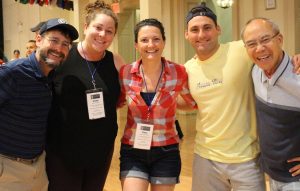 First-year Buttimer student Justin Brooks, director of the center for community engagement at Christian Brothers University, described the sessions led by Brother John Cantwell, FSC, and Dr. Timothy Gossen as focused on the foundation, which encompassed the Founder’s story. He highlighted how relatable De La Salle’s faith, journey, trials and successes were in reflecting on this formation experience.

“Every day was another confirmation of the Founder’s spirit,” Brooks said. “It could be a structured class discussion, a quote from a Brother, a laugh from a colleague, or a ‘thank you’ from another. Each one coupled with learning materials brought me back to [this] reflection and assurance.” 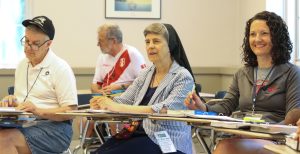 Buttimer II, totaling in 18 students, focused primarily on De La Salle’s educational vision in pedagogy and catechesis through The Conduct of the Christian Schools and other primary texts. These writings were then studied and analyzed within contemporary Lasallian educational mission terms.

Buttimer II student Sister Mary Ann Jacobs, SCC, professor in the school of education at Manhattan College, noted, “After two years of being apart, our teacher Greg Kopra spent our first session welcoming our sharing—joys, heartaches, accomplishments, trials—from the [pandemic] years. Within those first moments, we were re-connected to one another and the precious lives we share at a distance.”

Dr. Barbara M. Vallera, a fellow second-year Buttimer student and professor at Manhattan College’s school of continuing and professional studies, shared that education is a calling and “a divine destiny planned for us over many years of our lives,” an important takeaway from her fellow students.

Under the teachings of Brothers Timothy Coldwell and William Mann, 20 Buttimer III students wrapped up the three-year program by studying and immersing themselves in De La Salle’s spiritual vision and writings.

Buttimer III student Margaret Martinez, interim director of mission and ministry at Lewis University, noted the impact of learning the Method of Interior Prayer. “Reading and contextualizing the Meditations,” she noted, “provided an opportunity to examine and understand who De La Salle was and the time in which he lived more deeply. This deep dive into the man, the time and his educational philosophy with the earliest Brothers will be helpful in my role as animator at my institution.” 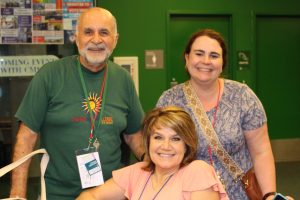 Three Districts in the Lasallian Region of North America (RELAN) were represented, the District of Eastern North America (DENA), the Midwest District and the District of San Francisco New Orleans. Buttimer also had several international attendees, traveling from Australia, Canada, India, Malaysia, New Zealand, Pakistan and the Philippines. Buttimer II student Brother Sheferaw Bezabih from the Lwanga District of Africa regarded Buttimer as “a golden chance for me to witness how diverse and unified we are as Lasallians.”

The Buttimer Institute is a program of the Office for Lasallian Education at Christian Brothers Conference. Established in 1984, this program is named in honor of Brother Charles Henry Buttimer, FSC, (1909-1982), the first American Superior General of the Brothers of the Christian Schools (1966-1976).