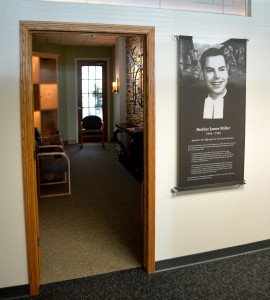 Brother James was shot to death on February 13, 1982, in Huehuetenango, Guatemala, while repairing a wall at the De La Salle Indian School. He was very aware of the oppression of the Guatemalan Indian people and worked to provide training in job and leadership skills. He was thought to be martyred over the Brothers efforts to keep the Indian boys from being conscripted into the military. He previously taught at Cretin High School, now Cretin-Derham Hall, in St. Paul, Minnesota, before ministering to the people of Nicaragua and Guatemala. 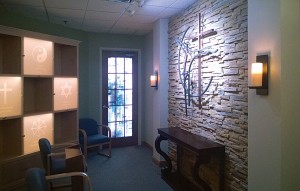 The prayer room is a non-denominational space used for reflection, contemplation, spiritual meditation or prayer. The room contains six symbols representing the religions of Christianity, Judaism, Islam, Hinduism, Buddhism and Taoism as well as chairs, kneelers and a table. It also features an installation depicting Christ on the cross by renowned sculpture artist Juan Angel Chavez, whose work is made of all found materials, light and sound.