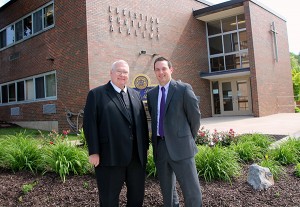 Christian Brothers Academy (CBA) in Syracuse, New York, will embrace a new model of leadership with the start of the 2015-16 academic year. CBA will adopt a president and principal model.

Brother Joseph Jozwiak, FSC, who has served as principal at CBA since 2009, will return as president. He will supervise business operations and external affairs, and will oversee the school’s adherence to the Lasallian mission. Brother Joseph was a member of the CBA board of trustees from 2007-09. He has previously served as Visitor of the former New York District, along with serving as a school administrator, counselor and faculty member for other ministries.

Matthew Keough will step into the role of principal and manage the daily responsibilities of the school. Keough has served at CBA since 2004 as a teacher and coach. Additionally, he has served as chair of the mathematics department, chair and representative of faculty and staff on CBA’s board of trustees, and chair of the faculty and staff mission and ministry team. He was also a delegate for the Lasallian Region of North America to the 2014 International Symposium of Young Lasallians.