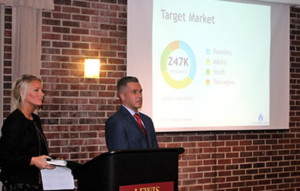 Christian Brothers Services (CBS) is honoring its founder, Brother Joel Damian, FSC, with an endowment to Lewis University in Romeoville, Illinois. The endowment is entitled the “Brother Joel Damian, FSC, Business Plan Competition,” and will help offer a platform that fosters entrepreneurial thinking and transform thoughts into reality, better preparing students to compete in today’s global world. Brother Damian orchestrated the concept of pooling resources to help define insurance and financial needs and requirements, making the De La Salle Christian Brothers one of the first religious orders to do so.

Open to all Lewis University students, the program provides feedback and guidance from faculty, Lewis alumni and industry professionals. The top teams compete in the finals, where they present their ideas live in front of a judging panel. Funds are awarded to top performers to assist in startup costs for their business model.