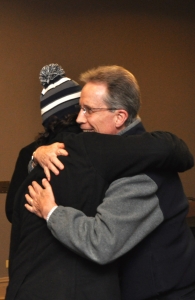 A spirit of community kicked off the 42nd annual Huether Lasallian Conference Thursday, November 19, with the theme Lasallian Educational Community: Hands and Hearts Associated for Mission.

Throughout the conference, Lasallians will not only gain insight on community through speakers and breakout sessions, they will also build community by meeting in small groups (casas or home communities) of like ministries. They will gather to reflect on presentations, to discuss and share what Lasallian education community means, how to recognize diversity in communities, and how to build communities in local settings.

The opening night of Huether featured the first casa meetings during which participants met in assigned groups, based on the type of ministry in which they serve. While gathered, each group developed a “mission statement” for fulfilling their roles as Lasallian educators and administrators. They then created banners to illustrate this mission. These banners were then displayed in the closing session and a representative from each group described the drawing. 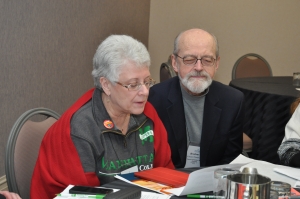 Tom Darnowski, a current Lasallian Volunteer at The San Miguel School of Providence, in Providence, Rhode Island, and a first-year attendee of Huether, described his casa experience, “I think this a really good way to build community and to get a dialogue going between people that wouldn’t normally be talking because they are in different districts. The casa meetings create an energy that feels really dynamic.”

“I think the addition of the casas is fantastic because I’ve found that with different workshops that you may go to, whether they’re secular or religious, a lot of the times you hear a speaker or presentation and you don’t have any time to process.” said 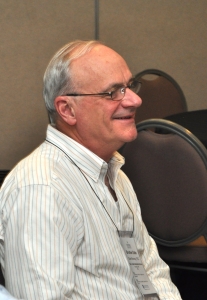 Jeff Ramon, campus minister from Saint Paul’s School in Covington, Louisiana, reflected on the addition of the casa program. “Also, if you are there with people from just your school, then you only get one perspective. However, with casas you can go back and get way more than one perspective. This is a great way to network and to learn more.”

Lasallian animator, French teacher and department chair for languages, Linda Burlon, traveled to Chicago from De La Salle College “Oaklands” in Toronto, Canada, and is attending her fifth Huether. “I like the inclusion of the casa component because I think it is an integral part of bringing us together in community. It’s a wonderful way to discern and reflect on what we have heard from the guest speakers.”

After the meetings, the evening ended with prayer and a social. More casa meetings, speakers and breakout sessions will highlight the next two days of conference activities. 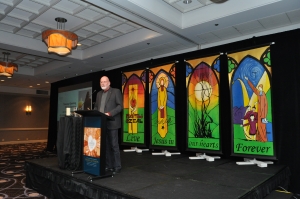 ature speaker John L. McKnight, who will discuss how, over the last century, most communities have transferred their child-raising functions to the schools, and how as a result of that, schools have become overloaded and local communities have grown weak. McKnight will describe local initiatives where communities are recovering their capacity to teach and raise their young people. McKnight is co-director of the Asset-Based Community Development Institute and national best-selling co-author of Building Communities from the Inside Out: A Path Toward Identifying and Mobilizing a Community’s Assets with Jody Kretzmann. McKnight also co-authored The Abundant Community: Awakening the Power of Families and Neighborhoods with Peter Block.

Saturday will feature speaker Brother Armin A. Luistro, FSC, secretary of the Department of Education, Philippines, who will highlight his experience building educational communities, especially his work in higher education in multi-religious and multi-ethnic communities and as sec 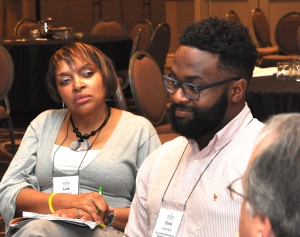 Huether is taking place for the second consecutive year at the Holiday Inn Chicago Mart Plaza River North. It will conclude Saturday, November 21 with a banquet honoring Distinguished Lasallian Educators in the Region. Huether, hosted by Christian Brothers Conference, is an opportunity for educators to not only learn new techniques and find inspiration, it also allows them to interact, share best practices, and grow more deeply committed to their vocation of providing students with transformative, holistic experiences.