Creatively sharing the transformative mission of Lasallian Volunteers was a key to the fundraising success of the 6th annual LVs Run, which took place in November as part of the Williams Route 66 Marathon in Tulsa, OK. Runners stepped up their efforts as they trained and fundraised for the marathon, half marathon, marathon relay and 5K distances.

Julia Walsh, an LV serving as a teacher’s aide at Cristo Rey Jesuit High School in Minneapolis and a graduate of La Salle University in Philadelphia, learned just how powerful social media could be in spreading a message and gaining support when she logged on to raise money, share her training journey and spread the LV mission.

“I knew I had to be creative to get the LV message out there and to raise the necessary funds,” she said. “Facebook presented a great forum for this creativity. It was the quickest way to reach as many of my friends as possible.”

Her request for donations was not a single post. She created a Facebook event page and posted updates regularly including about her training runs and favorite “pump up” songs. She even pledged to record a three-minute plank if 20 people donated by a certain date—and they did. To share her passions for running and LVs, she wrote about how donations help LVs along with top ten lists for why she runs and why she is an LV. She also wrote handwritten thank you notes to every donor. Her innovative fundraising effort worked. Walsh shattered the individual fundraising goal of $1,000 with a total of $2,203.20.

“I think this tactic was very important because I didn’t want donors to feel that their support ended after a donation,” she said. “I wanted my friends and family to feel a part of the LV Run experience because they truly inspired me throughout all of training and the race. I think the consistent posting kept them engaged and interested.”

T.J. Buckley, an LV teaching religion at Cathedral High School in El Paso, TX, credits his success of raising $2,168.28 to getting his students engaged and interested. He shared the LV story with them by showing videos on the LV website, and sharing stories of LVs and their work throughout the Region. He also offered fun incentives for reaching set amounts like throwing a party on the day he left for the race. As a reward for raising $2,050, he let the students shave his head throughout the day with each class getting a different design.

“I was extremely touched by their willingness to participate in my fundraising effort,” said Buckley. “It meant a lot because I am a teacher and as a teacher I feel I am nothing without my students and my fundraising proved they are all I need to make a difference.” 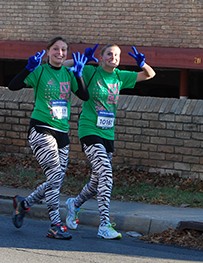 Buckley and Walsh were among the approximately 40 current LVs, alumni, and friends who raised money and laced up their running shoes for LVs Run. Playing off of the Williams Route 66 Marathon, LVs set a fundraising goal of $66,000 and broke it with almost $69,400 dollars raised thanks to donors and sponsors, including the District of Eastern North America which was the official LVs Run sponsor with a donation of more than $5,000.

“It’s absolutely wonderful to have the support of the Districts, the Lasallian colleges and universities, and the Brothers’ communities as sponsors,” said Andrew Blythe, LV Director of Development and marathon runner. “We could not have had the most successful LVs Run to date without their contributions and the hard work of planning committee, made up of second year LVs, Chris Hueg, Sean Barber, and Stephanie Carlsen.”

The number of runners increases each year with more and more LVs and friends being empowered by service to take on this physical challenge.