Day One of LASSCA Initiates Dialogue Among Lasallian Leaders 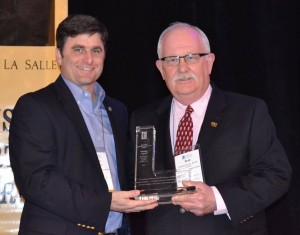 After coming together for Mass at Saint Mary’s Church in downtown San Antonio, conference participants were officially welcomed by LASSCA President Denise Jones and Mark Freund, Executive Director, Office for Lasallian Education. The association, represented by past President Chris M. Fay, then presented the Brother Michael Collins, FSC Award to the swing choir at Saint Joseph’s Collegiate Institute (SJCI) in Buffalo, New York. Receiving the award on behalf of the choir was SJCI President Bob Scott, AFSC, who commented that the swing choir was a great way of touching people throughout the United States with the spirit of Saint John Baptist de La Salle.

The highlight of the opening evening was the Wine & Wisdom gathering which paired attendees from across the Districts in groups that discussed their experiences and challenges in four broad areas of challenges facing our communities generally and our Lasallian schools in particular. These topics included Canon Law and our schools’ relationship with the local Church, issues related to members of our communities who identify as LGBTQ, forming disciples in a society in which students’ exposure to “Church” increasingly relies on their experience in our schools, and finally on the challenges faced by schools that are struggling to deal with students who are immigrants.

Commenting on the evening session, Brother Daniel Aubin, FSC, of Saint John Paul II Academy in Boca Raton, Florida, noted that the collected wisdom represented at each of the discussion tables was obvious given the challenging nature of the topics being discussed.

Check this page and visit Facebook and Twitter with #LASSCA2016 for frequent updates and pictures throughout the conference.