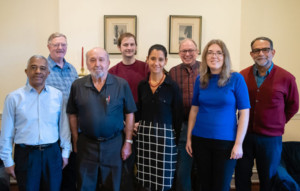 In attendance were representatives from three of the four Districts and two Brothers from the Institute in Rome.

In 1990, when computers were an innovative and novel feature, each District sent its archivist to Memphis for the first-ever conference of the new DLSRAA. These men, and, in time, joined by women, have been meeting almost yearly ever since.

The outcome of this meeting resulted in three unanimous agreements: “(1) we will all collaborate to digitize our respective archives, (2) we desire and endorse the creation of a worldwide Lasallian database of our separate repositories, and (3) we stand united with Bro. Diego and Bro. Hilaire—and with Brother Superior General and with the General Council—for digital interconnectivity to preserve and to share our unique Lasallian patrimony for the benefit of researchers and future generations.”