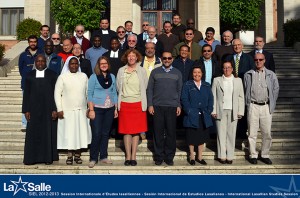 Brothers and lay partners who are participating in the International Lasallian Studies Session (SIEL) completed the first stage of the program which was held at the Generalate in Rome, October 21- November 16. The program was developed by the Institute’s Service of Lasallian Research and Resource in response to the call of the 44th General Chapter for new Lasallian research and to publish these works for a better understanding and awareness of the Lasallian identity.

The SIEL program is designed to accompany participants in pursuing scientific Lasallian research for publication and dissemination inside and outside the Lasallian milieu. The long-term goal of SIEL is to develop a corps of regular contributors to the living body of scholarly research and writing that stimulates and promotes Lasallian thought around the world. “It is time for us to be educational leaders again,” said Vicar General Thomas Johnson at the close of the first stage.

The one-month residential stage in Rome focused on historical and critical Lasallian foundations, as well as on archival and research methods. The second stage, which began on December 1, entails a seven-month period of both online and personal research work that culminates with the publication of a research project.

Bob Carrejo, Director of Communications for the New Orleans-Santa Fe District, provided the following weekly reports to capture the importance of scholarly research to the future of the Lasallian mission:
Week 1
Week 2
Week 3
Week 4