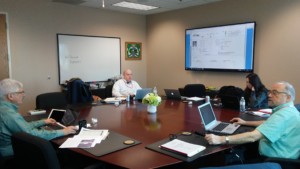 For the first time, the secretaries for each District in the Lasallian Region of North America (RELAN) gathered together to learn about the new comprehensive database for the Institute of Brothers of Christian Schools. The meeting took place April 10-11, 2018, in Romeoville, Illinois. Denis de Villers, the communications adviser for the District of Francophone Canada, was in attendance and offered this summary:

Brother Antxon Andueza, FSC, secretary general in Rome, invited all RELAN District secretaries to gather in Romeoville to get to know each other and to share our realities and challenges. It was also an opportunity to learn more about the Institute database and what is expected from us regarding the administrator’s directory, the protocol for managing documents, and our contribution to the Institute database.

We became very aware of the importance of the District statistics, which contribute to the Institute in the big picture. Indeed, those statistics not only include the Brothers, but also the novices and all the non-FSC personnel. The communities, schools and apostolates are too, an important part of it. In the years to come, the database will be an important reference for historians and university researchers.

The formation session was hosted by Brother Michael Quirk, FSC, CEO of Christian Brothers Services. He made sure that we had everything we needed to be efficient in all our meetings. Sherri Kavanagh, one of the participants from the Midwest District, was our restaurant tour guide and a good Chicago ambassador. Maria Pollet represented the District of San Francisco New Orleans and Brother Joseph Juliano, FSC, joined the meeting for the District of Eastern North America.

We cannot wait to renew the experience.