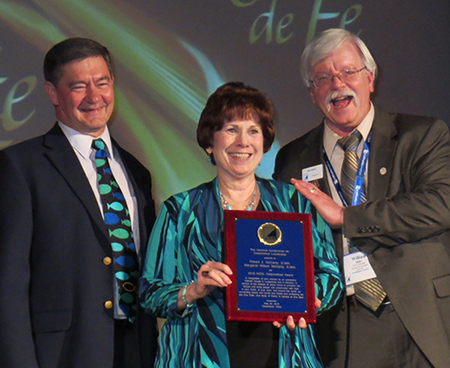 Dr. Margaret McCarty, Executive Director of the Office of Lasallian Education, was honored with the National Conference for Catechetical Leadership’s (NCCL) 2013 Catechetical Award. She was honored jointly with her husband, Dr. Robert McCarty, Executive Director of the National Federation for Catholic Youth Ministry, May 22 at the 77th annual NCCL Conference and Exposition in Cleveland, OH.

The NCCL has awarded this honor annually since 1985 in recognition of those who make exemplary contributions to the ministry of catechesis. Bob and Maggie McCarty, each of whom holds a Doctor of Ministry degree, have served in many ways, not only professionally, but also through volunteer roles at their home parish, St. Francis of Assisi in Fulton, as catechists in the Confirmation Program and in the Sponsor Couple Marriage Preparation Program. They also jointly facilitate retreats for various dioceses nationwide, along with teaching, writing, and speaking on youth ministry, adolescent development and faith formation around the world.

In the announcement of their selection, NCCL described the McCartys as “enthusiastic proclaimers of the Gospel message” and lauded their commitment with the following: “Not only has this couple touched the head, heart and hands of many, they have used their heads to teach God’s truths, their hearts to genuinely welcome anyone and their hands to do God’s work. This husband and wife, in all they do and in their very lives, give witness to a loving covenant with each other in Christ.”

“I am absolutely humbled and honored to receive this award, especially for Bob and I to be recognized together as a married couple.” said Dr. Maggie McCarty. “We met through ministry and it has remained a very important part of our marriage and our professional lives, as we continue to serve the church. To be   recognized by the NCCL is unexpected and very much appreciated.”