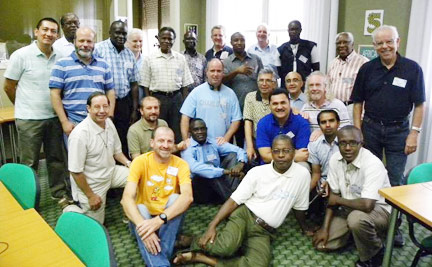 Forty Brothers from eight congregations in 24 countries reinforced their bonds of collaboration during a September gathering hosted at the FSC Generalate in Rome. The inter-congregational meeting focused on “The Identity and Mission of the Religious Brother in the World Today.”

Among the goals were to foster mutual knowledge and relationships among the Institutes, experience joint formation, encourage Brothers to meet on local levels, and draw up materials to help in continuing prayer and reflection. The event motto “All Brothers” challenged them to grow and give life through their missions and to remember they live in service to others.

Brother Robert Hazard of DENA joined De La Salle Christian Brothers from Mexico, Columbia, Burkina Faso, Singapore and Spain in representing the Institute. He called the spirit of Brotherhood outstanding. “I was amazed at the enthusiasm of the group. It was abundantly clear that each Brother present, whether from Burundi, India or Samoa, was very convinced of the value of being a Brother,” he said. “I know that one thing I saw clearly was the value of different congregations working together. We have so much in common and we have lots to share.”

Bro. Robert also described the presentations that had the most impact on him. “We heard the Superior General of the Marists talking about the ‘cultural and religious tsunami’ that is coming, we heard Brother Antonio Botana, FSC, comparing shared mission to an ecosystem, and we heard the Congregational Leader of the Christian Brothers of Edmund Rice challenge us to meet the real needs of today,” he said.

Superior General Brother Álvaro Rodríguez Echeverría expressed his joy regarding this first meeting of Brothers. In a presentation, he talked about how Brothers are called by God to be prophets for the world. He stressed the need for congregations to be creative and keep the hope alive for young people and the world.