Huether 2017 Brings Together Many Voices

Those are just a few words Lasallians chose to describe their experiences at the 44th annual Huether Lasallian Conference, which took place November 16-18, 2017, at the Grand Hyatt Denver in Colorado, the first time the conference has taken place in Denver. 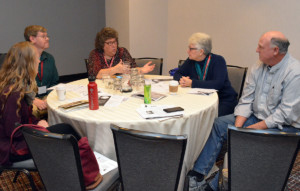 Brought together around the theme “One Call, Many Voices: Dialogue, Inspire, Transform,” more than 200 participants, presenters and others listened, reflected and discussed the role Lasallians play in being contemporary Good Shepherds to those who are entrusted to our care. The theme was inspired by the Lasallian Reflection for the 2016-2017 liturgical year, “One Call, Many Voices.”

“I thought it was very inspiring,” said Roxanne Hand, first-time attendee and English teacher at Totino-Grace High School in Fridley, Minnesota. “I felt that I have taken something back to my position that will enable me to be a better teacher, and I’m grateful for that.”

Through keynote addresses, breakout sessions, casa discussions, and time spent with fellow Lasallians, participants were reinvigorated in their vocation. For many, a highlight was being able to connect with other Lasallians and learn how the mission is lived out in their ministries. 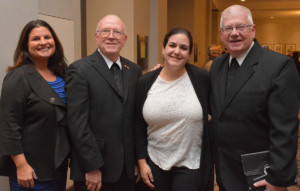 “By me only knowing [the] Lasallian [mission] through La Salle Academy, it’s given me a different lens, almost a mindset, that how we function is not how everybody else functions,” said first-time attendee Alana Parenteau, principal of De La Salle Middle School at La Salle Academy in Providence, Rhode Island. “Everybody just has different things and different dynamics going on, so it’s very interesting to hear.”

Before the conference officially kicked off Thursday evening, 75 Lasallians gathered for a first-time attendee social. Then, all participants came together for the opening session, which included an address by Brother Ernest Miller, FSC, D.Min., vice president for mission at La Salle University in Philadelphia, Pennsylvania, followed by a panel discussion facilitated by Mike Daniels, Ed.D., director of the Office for Education in the District of San Francisco New Orleans. Over the course of the conference, attendees heard from two keynote speakers. Christian Brothers Services sponsored the keynote by Ann Garrido, D.Min., associate professor of homiletics at Aquinas Institute of Theology in St. Louis, Missouri, who invited participants into a discussion around difficult conversations. Elizabeth Huntley, J.D., litigation attorney and child advocate, author and lecturer from Lightfoot, Franklin & White, LLC in Birmingham, Alabama, gave a powerful address on her troubled upbringing and the life-changing impact educators had on her.

Attendees came together in their casa groups at three times throughout the conference to discuss the messages they heard. Jamie Longo, executive director of the De La Salle Institute for Advanced Teaching and Learning at La Salle University in Philadelphia, Pennsylvania, said the casa conversations helped her get more out of her Huether experience.

“It was a really interesting conversation. I felt like everybody at our table was super engaged, and we had some really interesting things to share,” Longo said. “It helped me synthesize things that I might not otherwise have because they were bringing pieces to the conversation that were not necessarily part of my experience, so having them add those pieces really made the whole thing fall together for me really nicely.” 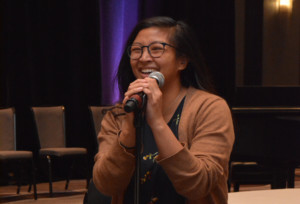 At the final gatherings of the casas, attendees stepped to the microphones to share summaries of their casa discussions and the impact the Huether experience had on them, including Daniella Laset, who graduated from La Salle High School in Pasadena, California, and now teaches chemistry there.

“My teachers made a huge difference for me, and I don’t think they realize it,” Laset said. “All of these people in this room, the way that they talk about their students and the way that they talk about planning, it’s really nice to hear because it’s something that I believe in. Being here in this room and having people affirm my ideas and validate me as a teacher, it makes me feel like I’m supposed to be there. This is my calling. I could have been at another school, but this is exactly where I need to be.” 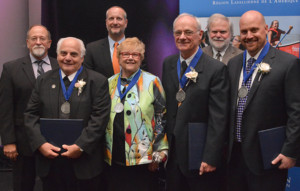 The DLEs with their District representatives.

Huether came to a close Saturday evening with the Distinguished Lasallian Educator Awards Banquet to celebrate outstanding educators in the Lasallian Region of North America.

For a second consecutive year, Lasallians took part in a pre-conference advancement track on Wednesday and Thursday, which included a networking reception, a keynote address by Colleen O’Grady, philanthropic strategist at Lipman Hearne, Inc. in Chicago, Illinois, and four sets of breakout sessions.

Huether, hosted by the Office for Lasallian Education at Christian Brothers Conference, is an opportunity for educators to not only learn new techniques and find inspiration, but to build community, share best practices, and grow more deeply committed to their vocation of providing students with transformative, holistic experiences.