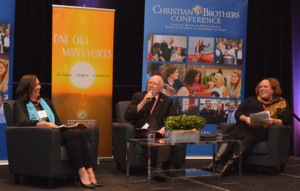 Panelists shared their thoughts on the Lasallian Reflection and their work in the mission during the opening session.

An inspiring opening session welcomed Lasallians to the start of the 44th annual Huether Lasallian Conference Thursday, November 16, 2017. More than 200 participants, presenters and others are exploring the theme “One Call, Many Voices: Dialogue, Inspire, Transform” by listening, reflecting and discussing the role Lasallians play in being contemporary Good Shepherds to those who are entrusted to our care. The theme is inspired by the Lasallian Reflection for the 2016-2017 liturgical year, “One Call, Many Voices.” The three-day gathering is being held in Denver, Colorado, at the Grand Hyatt Denver for the first time.

The opening session included an address by Brother Ernest Miller, FSC, D.Min., vice president for mission at La Salle University in Philadelphia, Pennsylvania. He invited participants to open themselves to the spirit and listen. Brother Ernest recalled how Saint John Baptist de La Salle needed God to speak first before he could act, saying De La Salle listened prayerfully and then ministered prophetically. 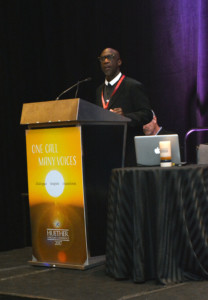 “I really appreciate the references to the Founder’s meditations and to this reminder for us to listen to the call of God,” said Theresa Flynn Houghton, president and CEO of De Marillac Academy in San Francisco, California. “Especially to take this moment tonight and the next few days to listen to each other, to listen to the God between us, and to hopefully better hear our own calling in the work that we’re doing.”

Brother Ernest’s address led into a panel discussion facilitated by Mike Daniels, Ed.D., director of the Office for Education in the District of San Francisco New Orleans. Panelists included Elizabeth Berkes, Ph.D., director of faculty development at De La Salle High School in Concord, California, Brother Thomas Casey, FSC, Auxiliary Visitor of the District of Eastern North America, and Peg Hodapp, Lasallian animator at DeLaSalle High School in Minneapolis, Minnesota. They shared how one commitment led to another in their lives and how they found themselves serving in their roles today. They then discussed the sections of the Lasallian Reflection that resonated with them and shared examples experiences that have enhanced their understanding of the dialogues presented in the reflection.

Before the opening session, 75 Lasallians gathered at a social for first-time attendees, which was intended to welcome them into their first Huether experience and begin to build community among them.

“It was great to get to meet some people from within our District, talk to a couple of individuals from outside of the District. It was very nice to get to start the weekend off by getting to meet some other people,” said Matt Agan, social studies department chair and director of alumni relations at Christian Brothers Academy in Albany, New York. 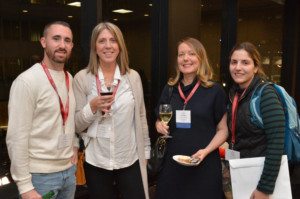 Sean Francioni, the new director of development at Archbishop Rummel High School in Metairie, Louisiana, said the advancement track made him realize that he has a lot to learn. Francioni said O’Grady’s address gave him ideas to take back to his school.

“It really made me look at a different approach to our marketing for some of our events, some of our giving days, and things of that nature,” said Francioni. “A lot of times when you’re trying to get your message out, you don’t really take a look at what that message is and how it’s coming across to the end user. So, it really made me sit across the table and take a look at how we can do better there.”

Over Friday and Saturday, participants will hear two keynote presentations, attend breakout sessions, visit exhibitors, spend time building and renewing relationships with fellow Lasallians, and gather as Districts for discussions and dinner. Ann Garrido, D.Min., associate professor of homiletics at Aquinas Institute of Theology in St. Louis, Missouri, will speak Friday morning, with her talk sponsored by Christian Brothers Services, and Elizabeth Huntley, J.D., litigation attorney and child advocate, author and lecturer, from Lightfoot, Franklin & White, LLC in Birmingham, Alabama, will address attendees on Saturday. The conference will include time for participants to gather in casa communities to discuss the messages they heard in the keynote addresses and breakout sessions. Huether will end Saturday evening with Mass and the Distinguished Lasallian Educator Awards Banquet to celebrate outstanding educators in the Lasallian Region of North America. 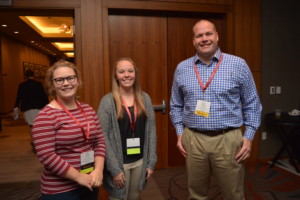 Participants of Huether gathered for a social on their first evening.

Joseph Preston, director of campus ministry at Christian Brothers University in Memphis, Tennessee, is looking forward to several highlights over the next few days.

“The first would be networking, catching up with a lot of friends, former students, old colleagues, but also just looking at the mission anew. I think that’s important. That’s what Huether gives us,” said Preston.

Huether, hosted by the Office for Lasallian Education at Christian Brothers Conference in Washington, D.C., is an opportunity for educators to not only learn new techniques and find inspiration, but to build community, share best practices, and grow more deeply committed to their vocation of providing students with transformative, holistic experiences.