The 2018 Huether Lasallian Conference turned its focus to the Year of Lasallian Vocations on Saturday, November 17 with a keynote address and panel discussion, along with breakout sessions. The Year of Lasallian Vocations will be celebrated during the 2018-2019 liturgical year, which will start on December 2, 2018, to mark the 300th anniversary of Saint John Baptist de La Salle’s entry into eternal life and celebrate the impact of the mission he started. The Lasallian Jubilee Year, declared by the Holy See in honor the anniversary, began Saturday.

The morning began with a keynote address and panel discussion, sponsored by Christian Brothers Services. Brother Timothy Coldwell, FSC, General Councilor for the Lasallian Region of North America, and a panel of educators shared their vocational journeys and invited participants to reflect on their vocational callings.

“I’ve been in higher education now for 30 years or so,” said Dr. Mark Barber, associate vice president for academic affairs at Saint Mary’s University of Minnesota in Winona. “I’ve seen myself move from position to position, and many of those movements came out of a particular need at a particular time, but then in retrospect, there seems to have been a path that brought me to a place that is good for me. It was very much responding to particular moments, particular needs, particular people, particular requests. 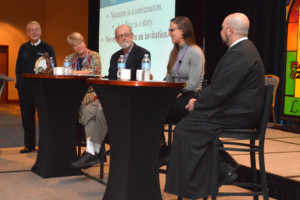 Throughout the Huether Conference on Thursday and Friday, educators explored the theme “Limitless Potential: Transforming Lasallian Communities.” Keynote addresses, breakout sessions, gatherings by District, and time for discussion and community provided Lasallians with inspiration and ideas to take back to their ministries, along with a sense of association for mission.

“For all of us, it’s been an opportunity to connect with God with our deepest selves and one another, and that is one of the blessings we receive,” said Brother Joseph Kirk, FSC, who serves in student support at Sacred Heart Cathedral Community in San Francisco, California.

Huether, hosted by the Office for Lasallian Education at Christian Brothers Conference in Washington, D.C., is taking place at the Minneapolis Marriott City Center November 15-17, 2018. This year marks the conference’s return to Minneapolis, which is where the first gathering was held in 1973. Huether will return to Minneapolis in 2019. Follow the highlights here and by using #Huether2018 on Facebook and Twitter.