The 2018 Huether Lasallian Conference kicked off with a sense of community as more than 200 Lasallians gathered in Minneapolis, Minnesota, for the 45th annual conference. With the theme “Limitless Potential: Transforming Lasallian Communities,” Huether is taking place at the Minneapolis Marriott City Center November 15-17, 2018.

The theme is inspired by the Lasallian Reflection for the 2017-2018 liturgical year, Lasallians Without Limits, and addresses the critical role Lasallians play in transforming communities by going beyond geographical and societal borders. Keynote presenters, breakout sessions, and time for networking and discussion will help Lasallians to explore the theme. 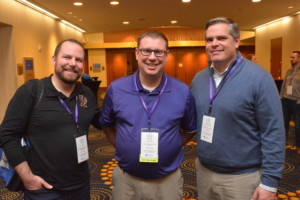 “Huether brings so many different types of Lasallians together,” said Dr. James Schlegel, head of school at Christian Brothers Academy in Albany, New York. “We focus on our own ministry, and it’s good to realize that not only are there other schools that do what we do, but all over the world, serving many different levels of need. I think it’s good to remind everyone that it’s a global mission.”

Thursday’s opening session featured a keynote address by Peter Stemp and Brother Téfio Raoul Traoré, FSC, both associate directors of De La Salle Solidarietà Internazionale – ONLUS, which fundraises to support Lasallian works around the world that serve those most in need. Using the booklet One Year in Mission Together: a Prayer for Each Project, a Project for Each Week, they shared examples of Lasallian ministries throughout the world to show how Lasallians are experts in observing local contexts, analyzing needs, and responding holistically to provide quality education to the most vulnerable in society. They encouraged attendees to bring the global Lasallian family to their students and invite them into deeper participation in the mission.

Alma Mejia-Garcia is a teacher at San Miguel High School in Tucson, Arizona, and project manager of Lasallians Without Borders, an initiative in the District of San Francisco New Orleans that highlights issues of vulnerable migrant populations at the United States – Mexico border. She was drawn to this year’s Huether by the focus on the global family and appreciated the keynote address.

“It’s walking with the students, with young people, wherever there are,” said Mejia-Garcia. “It doesn’t matter if they are okay financially or they are not okay financially, but we’re all teaching them that it is our responsibility to serve. So, acknowledge your situation and go beyond your borders and try to put yourself in the other person’s shoes to understand what their needs are because we all need something.” 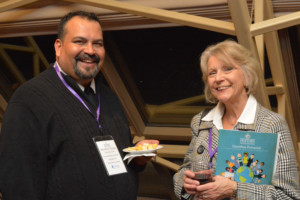 Before the opening session, Lasallians gathered at a social for first-time attendees, sponsored by Saint Mary’s Press in Winona, Minnesota, to welcome them to the Huether experience and begin to build community amongst themselves.

Cami Dahlstrom, who is in her first year as assistant principal at Benilde-St. Margaret’s School in St. Louis Park, Minnesota, attended the social. “It was really essential to meet people. So that was really, really nice. In my District, it was fun to meet people who are in Minnesota, but are in different schools,” she said. “I just wanted to get my feet wet a little bit in Lasallian. All things Lasallian. So, [Huether] is just a great place to come.”

On Friday, Dr. Michael “Mykee” Fowlin, psychologist, performer and poet, will present the keynote address and invite attendees to consider how they can transform their communities by celebrating differences in an inclusive process. On Saturday, Huether will turn its focus to the Year of Lasallian Vocations, which will be celebrated during the 2018-2019 liturgical year to mark the 300th anniversary of Saint John Baptist de La Salle’s entry into eternal life and celebrate the impact of the mission he started. Brother Timothy Coldwell, FSC, General Councilor for the Lasallian Region of North America, and a panel of educators will invite participants to reflect on their vocational callings in light of this anniversary year. This day also coincides with the inauguration of the Lasallian Jubilee Year.

Huether is hosted by the Office for Lasallian Education at Christian Brothers Conference in Washington, D.C. This year marks the conference’s return to Minneapolis, which is where the first gathering was held in 1973. Follow the highlights here and by using #Huether2018 on Facebook and Twitter.