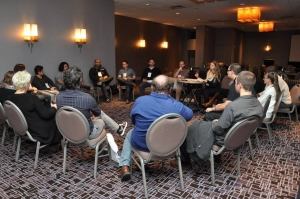 Participants gather together for a casa meeting

After three days filled with keynote speakers, breakout sessions, and casa (home community) meetings, participants of the 2015 Huether Lasallian Conference themed, Lasallian Educational Community: Hands and Hearts Associated for Mission, headed back to their ministries with renewed excitement to serve.

“This was my first Huether Lasallian Conference, and at first it was a lot for me to take in, but when we broke into our casa groups I felt at ease because it was a real a sense of community,” shared Imram Shamim, Catalyst Schools, Chicago, Illinois. “One thing I particularly liked about my casa group is that we pulled our chairs together and made a circle – which felt like a circle of trust. I felt safe in that. It made me realize that no matter where we are from, our struggles are all the same, the mission is the same, and we’re doing the same thing, no matter who we are. I have a very different background to anyone else I met here, but what I realized is that it all boils down to the same thing for all of us – we want to help people; kids, adults, whomever. We just want to help.” 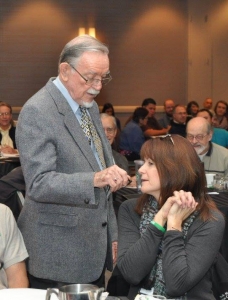 John L. McKnight engages with participants during his keynote address on Friday

Participants attended two keynote addresses, both of which were received with great enthusiasm. Friday featured a presentation from John L. McKnight, co-director of the Asset-Based Community Development Institute and national best-selling co-author of Building Communities from the Inside Out: A Path Toward Identifying and Mobilizing a Community’s Assets with Jody Kretzmann. McKnight encouraged participants to recognize the gifts that they already possess, and to draw out the gifts, or assets, available to them from members of their own communities.

Brother Armin A. Luistro, FSC, secretary of the Department of Education, Philippines, lit a fire in the hearts of participants by encouraging them to go even further in their ministries, and to recommit to the mission. “Brother Armin’s keynote address was spot on. He put forth the challenge for Lasallian schools and ministries of education to balance the typical transactional model of service to others to a model that embraces transformative justice. Within the diversity of the Lasallian world, we are called to proclaim the reign of God through educational justice,” remarked Brother Ernest Miller, FSC, vice president for Mission at La Salle University, Philadelphia, Pennsylvania. 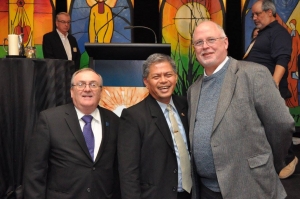 New to this year’s conference was the addition of casa meetings, which were organized for participants based on what type of ministry they serve in. These groups met four times during the conference to determine a mission statement relevant to the people they serve, and to reflect on the major points of the keynote speakers.

Director of Formation for Mission, Greg Kopra from the District of San Francisco New Orleans said, “My casa group included Lasallians from several of our higher educational institutions in the Region along with another member of a District leadership team. And our processing was rich and very meaningful. I made many new friends in the casa, and I gained numerous new perspectives on the challenges of educational community in Lasallian ministries. I am grateful for this unique Huether experience.”

The conference concluded Saturday with Mass and the Distinguished Lasallian Educator (DLE) Awards Banquet where eight Lasallians were honored.

Read more about the DLE Awards > 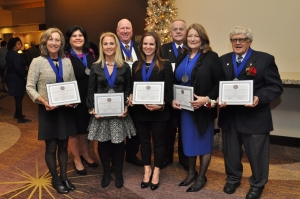 For some, this was their first time attending the Huether Lasallian Conference and the sense of community was truly present. Travis Wiggins, from Tides Family Services in Providence, Rhode Island, was among the newcomers. “One of the things I will take away from the Huether Conference, is much more passion for what I do. While I already am passionate about what I do, opportunities like this give you the chance to get things into perspective and to focus. When you are around a bunch of people who are about the same mission, it lets you know that you’re part of a much larger community and moving towards the same goal.”

Mike Daniels, president of De Marillac Academy in San Francisco, also felt the presence of community throughout the conference, “Huether 2015 was a wonderful expression of our Lasallian mission. The focus on community was lived out not only through keynotes and workshops, but most importantly through our experience as one Lasallian family. My colleagues and I from De Marillac Academy return to San Francisco refreshed, enthused and feeling blessed by the privilege we enjoy as Lasallian educators.”

The Huether Lasallian Conference isn’t just for teachers or administrators. Dominic Buchholz works at La Salle Manor Retreat Center in Plano, Illinois. “I am brand new to the Lasallian world. Coming to Huether was a chance

for me to grow and also grow around other people. From the minute I got here, the culture was just so welcoming. As soon as we broke off into casas, that became my favorite part, because I got to know so many people in a very personal way. This was such a great way to build connections in the very large, yet at the same time very small, Lasallian world.”

Huether will return to Chicago for next year’s conference, which will be held November 17-19, 2016. It will take place again at the Holiday Inn Chicago Mart Plaza, where it has been held since 2014.