Huether: Witness to the Lasallian Mission 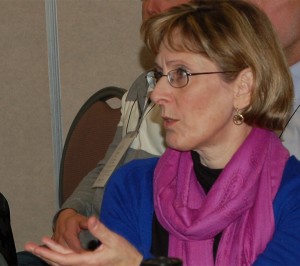 Excitement, inspiration and a sense of community filled Lasallians as they headed back to their ministries following the Huether Lasallian Conference in Chicago.

“This is awesome. I’ve had a lot of fun,” said Jane Nitschke, a religious studies teacher at La Salle Catholic College Preparatory in Milwaukie, Oregon.

Nitschke, like many participants, found inspiration in the various sessions. “I was just typing madly and coming up with different ideas of what can I do in the classroom,” she said.

That desire to learn new ideas drew more than 300 participants to Chicago for the 41st Huether Conference, which took place November 20-22 with the theme The Lasallian Mission: Word, Witness & Invitation.

“I thought this conference was excellent in terms of the topic of evangelization,” said Bridget Grady, third grade teacher at La Salle Academy, a Miguel model school in Philadelphia. “I think it’s applicable to my students, even though they’re so young, for them to learn that it’s not about just saying God’s word and sharing the good news in words, but showing it through your actions.” 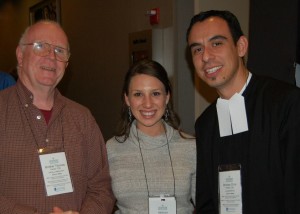 Participants heard powerful addresses by John L. Allen, Jr., associate editor for The Boston Globe, about Pope Francis, and Dr. Carole Eipers, vice president and executive director of catechetics of William H. Sadlier, Inc., who creatively invited attendees to open the door of faith to others. John Donohue-Grossman, director of retreats at La Salle Manor Retreat Center in Plano, Illinois, led an interactive closing session during which participants focused on the practical nature of their experiences during the conference and generated best practices to take home.

“It’s been really great,” said Maggie Naughton, campus minister at La Salle Academy in Providence, Rhode Island. “I’ve really enjoyed the keynotes. They’ve all worked really well together and built off each other.”

Huether also featured two pre-conference workshops and musical contributions from singer/songwriter David Hass, who is the director of The Emmaus Center for Music, Prayer and Ministry and campus minister and liturgical choir director at Cretin-Derham Hall in St. Paul, Minnesota.

For some, attending a Huether Conference is an introduction to the wider Lasallian family.

“It’s the thing that helped me start on my journey. I was invited – and that’s always a theme that comes up for everybody, right?” said Lois Harr, director of Campus Ministry and Social Action at Manhattan College in Riverdale, New York. “I was invited by a Brother to go to Huether in 1999.” 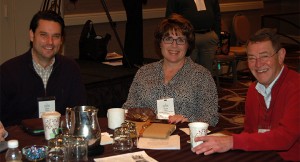 Whether it’s with repeat participants like Harr, or first-time attendees, the feeling of family is something participants often mention.

“I went to La Salle College High School in Wyndmoor, Pennsylvania, La Salle University in Philadelphia, now I’m a Lasallian Volunteer. It’s very important to me,” said Dan Bowers, who serves at San Miguel School, Chicago. “I feel like these people are like my family, being Lasallian … it’s just really great, and everyone has the same kind of ideas.”

“I think it’s a great witness to the vibrancy of the mission and how it exists in many different ways, but there’s a core that when you talk to people, it’s the same,” said Brother John. “The themes can change, the speakers can change, but the fact that you will meet and interact with people that are doing things similar and different than you is invaluable.” 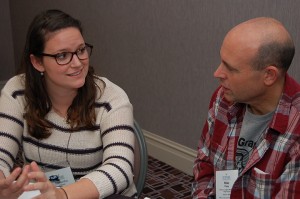 That community building, combined with inspiring addresses and insightful breakout sessions, provides witness to the strength of the Lasallian mission.

“Words can’t explain how much I enjoyed myself,” said Brother Roberto Martinez, FSC, religion teacher at Sacred Heart Cathedral Preparatory in San Francisco, California. “You have to come here to experience it yourself and see all these Lasallian people, how the mission is important.”

Huether will return to Chicago for next year’s conference, which will be held November 19-21, 2015, on the topic of educational community. It will take place at the Holiday Inn Chicago Mart Plaza, the same site as the 2014 gathering.