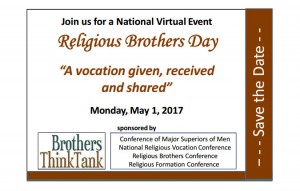 The Conference of Major Superiors of Men (CMSM) has announced that the inaugural Religious Brothers Day (RBD) will be held on May 1, 2017, the feast of St. Joseph the Worker.

CMSM is an association of the leadership of men in religious and apostolic institutes in the United States. The Conference has formal ties with the U.S. Conference of Catholic Bishops, the Leadership Conference of Women Religious, the National Assembly of Religious Brothers and other national agencies.

Following the publication of the Vatican document on the Identity and Mission of the Religious Brother in the Church, a Brothers’ Think Tank committee was formed to plan the celebration which will include prayer services and tributes to jubilarian brothers from lay and mixed communities and institutes of apostolic life, as well as other activities.

Future details about the Religious Brothers Day will be here.

Use #religiousbrothersday on social media for related activites.

Download a Save the Date for the RBD here >