Initial gatherings for the fourth cohort of the Brother John Johnston Institute of Contemporary Lasallian Practice took place in July 2022 by District. Themed “The Founding Story and Vision,” these gatherings kickstarted the two-year formation program. 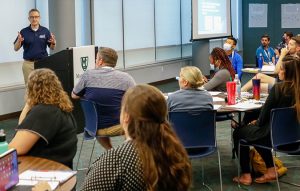 The summer gatherings began with the District of Eastern North America (DENA) participants meeting at Manhattan College in Riverdale, New York, followed by the Midwest District at Lewis University in Romeoville, Illinois, and ending with the District of San Francisco New Orleans (SFNO) at Mont La Salle in Napa, California.

Each gathering lasted approximately four days and began with introductions, a welcome and the first of 10 sessions, “Why am I Here?” Much of the in-person sessions involved lectures, small and large group discussions, as well as time for reading, reflection and prayer. Midwest participant Amy Ware, director of career services at Christian Brothers University in Memphis, Tennessee, particularly enjoyed the various prayer services throughout the formation program. She noted, “It allowed me to center and focus, which enabled me to put many of the ‘everyday’ concerns associated with my work into a better, more positive perspective.” 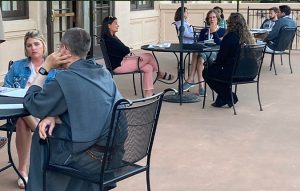 Participants discuss in small groups at the SFNO gathering.

Participants engaged in prayer, study, reflection and dialogue with one another, providing an opportunity for assisting in more deeply animating our shared mission on the local level and within the broader Lasallian family. Reflecting on the Johnston community, DENA participant and English teacher at Christian Brothers Academy in Syracuse, New York, Gretchen Pledger noted that being “with people who understand and live the Lasallian mission with me made me feel instantly connected.”

Johnny Kue, the director of graduate support and admissions coordinator at The San Miguel School of Providence in Rhode Island, described the Johnston community as diverse, supportive and collaborative. “It was uplifting to get affirmation from your peers that you were doing a great service and that it doesn’t go unnoticed,” he shared. 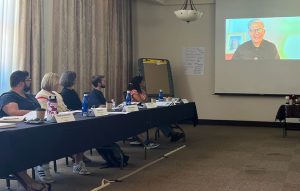 The second day led participants through five sessions, including historical context, the story of De La Salle, influential women in the life of the Founder, the role Lasallian women play today and reflecting on the Lasallian vocation. Following suit, the third day continued with four more sessions, including commitment to social justice, Partners and the future of the Lasallian mission, Association, community and looking to the future. The final day’s only session, titled “Looking Forward to the Next Session,” wrapped up the District gatherings.

Shayna Ortiz, campus minister and Lasallian animator at the LaSalle School in Albany, New York, shared how she felt she was witnessing the spirit of De La Salle amongst her uniquely diverse cohort, representing a variety of ministries and positions. A Lasallian Volunteer from 2021-2022 serving at the same school, she shared her surprise of how widely Lasallian pedagogy applies and “how other ministries translate that [mission] with the youth and families they serve.”

Midwest participant Aaron Benner, dean of students for Hill-Murray School in Maplewood, Minnesota, enjoyed meeting those similarly passionate in embodying Lasallian pedagogy. In sharing his deepened understanding of the Lasallian mission during this initial formation experience, he said, “I now have the knowledge and confidence to speak about Lasallian schools and their values and mission.” 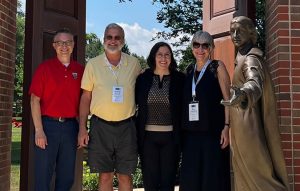 The District groups will gather again in October.