Participants of the Brother John Johnston Institute of Contemporary Lasallian Practice came together July 12-17 at Lewis University in Romeoville, Illinois, for the program’s summer session. While the spring and autumn sessions take place locally and online, respectively, the summer session is a chance for all participants from the Lasallian Region of North America (RELAN) to gather together as one.

[The Johnston Institute has] helped me to learn and understand the mission and approach to Lasallian education as well as how I might help others at my institution understand it,” said C. Andrew Lafond, assistant professor of accounting at La Salle University in Philadelphia, Pennsylvania.

Dr. Elizabeth Berkes, vice principal for faculty development at De La Salle High School in Concord, California, remarked that the session was a time for reflection. “We spent a considerable amount of time reflecting on what it means to be ‘together and by association.’ I was inspired and challenged to consider that Lasallian Partners must see the mission as their own – not the Brothers’ mission that lay partners simply ‘help with.’” 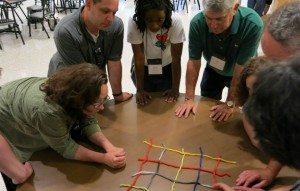 Participants work together to make a yarn net.

To further build on the theme of Association, one of the group activities was a net building project. Each group built its own yarn net, and then all groups put the nets together to create an even larger one.

Johnston participants will gather in person one final time in their local groups in March 2016, following online sessions in the autumn. The Johnston Institute is a program of Christian Brothers Conference.