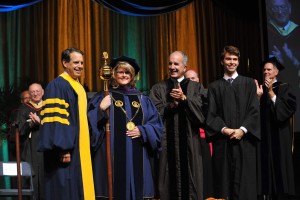 Hanycz is the first layperson and woman to permanently hold the office in the university’s 152-year history. The theme of the Hanycz’s inauguration, “Inspired by Faith. Dedicated to Service. United in Community,” was inspired by the Brothers of the Christian Schools’ core values of faith, service and community.

“It has been an incredible honor to lead La Salle University over the last several months and I look forward to officially being installed as La Salle’s 29th president today,” said Hanycz. “Each day that I spend on campus only reaffirms how proud I am to call myself a Lasallian. Just as the Christian Brothers who precede me have, I am committed to carrying the mission of St. John Baptist de La Salle forward and offering a quality and transformational education experience that provides students with the tools to lead productively in their careers, at home and in their community.” 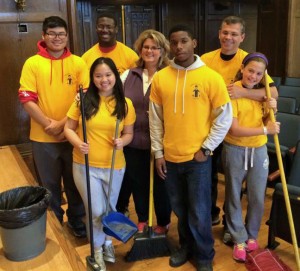 Inauguration Week kicked off with the Lasallian Day of Service on Saturday, October 3. More than 800 La Salle students, faculty, staff and alumni gave back to their communities by performing service projects at more than 40 locations in Philadelphia and across the country. Additional inauguration events included a faculty and staff panel discussion on “The City as a Classroom: Lasallian Higher Education in Philadelphia,” student dinners with President Hanycz, and an inauguration Mass at the Cathedral Basilica of Saints Peter and Paul.

Hanycz began her career as a securities and employment litigator for a law firm in Canada after earning her law degree from Dalhousie University in Halifax and a master’s degree and Ph.D. in law from Osgoode Hall Law School in Toronto. In 2003, Hanycz began her teaching career in 2003, eventually becoming principal (equivalent to president) of Canada’s Brescia University College.