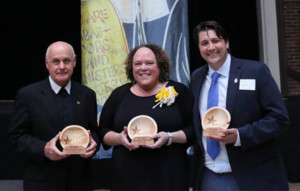 The Lasallian Volunteers (LV) honored three supporters from the Midwest District at the ninth annual FSC Awards, which was held June 9 at DeLaSalle High School in Minneapolis, Minnesota. The honorees were chosen for the notable contributions they have made to the program.

The awards are named in the spirit of three Brothers who embodied the LV values of faith, service and community during their lifetimes. This year’s recipients are: Brother Leo Kramper, FSC, the Farrell Community Award; Andrew Blake, LV 03-05, the Bassen Service Award; and Peg Hodapp, the Johnston Faith Award.