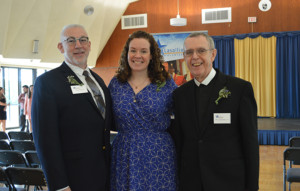 Lasallian Volunteers (LV) celebrated and honored three Lasallians from the District of Eastern North America (DENA) at the eighth annual FSC Awards on Saturday, September 29 at La Salle University in Philadelphia, which sponsored the event. The FSC Awards honor Lasallians who have made notable contributions to the program.

The awards are named in the spirit of three Brothers who embodied the LV values of faith, service and community during their lifetimes. This year’s recipients are: Brother Joseph Mahon, FSC, the Farrell Community Award; Kerry Conroy, LV 99-01, the Bassen Service Award; and Daniel Brenner, the Johnston Faith Award.

“Over the years, his ability to walk with so many young people during their service years and support them in bringing to life their experience, certainly has been significant in their lives, and I believe has been life-giving for Brother Joseph as well,” said Chris Swain, LV 04-06, who presented Brother Joseph with the Farrell Community Award.

Jolleen Wagner, LV 04-06, presented the award to Conroy and praised her longtime dedication to the mission. Wagner shared how not only the students at La Salle Academy have been blessed by the presence of Conroy in their lives, but also the LVs who were accompanied by Kerry during their years of service at La Salle Academy.

Julie Turner, LV 15-17, who presented the award to Brenner, said, “Dan truly understands that Lasallian Volunteers is an entrance point for so many of young people to become ‘Forever Lasallians.’ Dan is a beacon of that zeal for mission, and we thank him for his continued support of current LVs, our staff and our alumni. His witness is truly wonderful.”

Recipients are selected on a rotating basis between the Districts in the Lasallian Region of North America (RELAN). The 2018 recipients will be selected from the Midwest District.