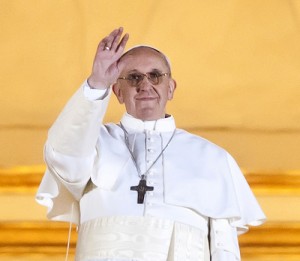 The Lasallian family in the Lasallian Region of North America wishes to extend prayers for and a welcome to Pope Francis. As we learn more about Pope Francis, Lasallians are encouraged by his reported dedication to the poor and social justice, which are two integral aspects of the Lasallian Mission. The De La Salle Christian Brothers and Lasallian Partners worldwide can feel a kinship with the new Pope, a Jesuit, through our shared vocations of education and service to the poor.

Brother Robert Schieler, General Councilor for the Institute of the Brothers of the Christian Schools, and Dr. Margaret McCarty, Executive Director of the Office of Lasallian Education, issued this statement regarding the election of the Pope Francis:

While it may be too early to know the person behind the title Pope Francis, we may take hope and inspiration from the choice of his name. Francis of Assisi is the patron saint of the poor and the patron saint of peace. Solidary with the poor and a world that is more peace-filled are very much needed in our time. As we welcome and pray for our new Pope and our Church may Lasallians everywhere recommit themselves to the Institute’s priority of service to the poor as well as working for peace and an end to violence in our world and in our own localities.

The Lasallian mission has been rooted in service to the poor since John Baptist de La Salle, Patron Saint of Teachers, founded the Institute of the Brothers of the Christian Schools in 17th century France. We continue that mission today by providing transformative and holistic education through a network of more than 100 schools and ministries in the United States and Canada. This network is part of a worldwide Institute that consists of approximately 5,000 Brothers and 80,000 Partners serving nearly 900,000 students in about 1,000 educational ministries in 80 countries.