Lasallians From Across the Country Attend March for Life 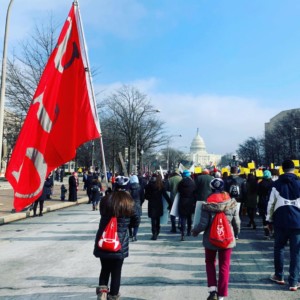 More than 300 Lasallian students from 14 ministries, along with educators/chaperones, traveled to Washington, D.C., to attend the 46th annual March for Life on January 18, 2019, with 71 attendees from four schools also participating in the youth Mass and rally at the Capital One Arena on January 17.

When asked about her experience of joining other Lasallians for the March, Mary Catherine Canary, a junior at St. John’s College High School in Chevy Chase, D.C., said, “It was impressive to see the amount of students from the other schools who had travelled so far to show their support. I was also very impressed with how everyone seemed as if we had all been friends for years even though we had only just met.” 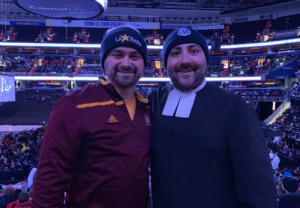 Seven ministries gathered to march together, an effort organized by Brother Paul Avvento, FSC, teacher at St. John’s College High School. Speaking on his attendance at the March, Brother Paul said, “It was a great experience to be surrounded by other Lasallians from across the Region sharing hope and prayer for the restoration of human dignity and respect. To see our mission of ‘providing a Christian and human education’ being lived in action is a visible sign of the transformative nature of the Lasallian charism.” 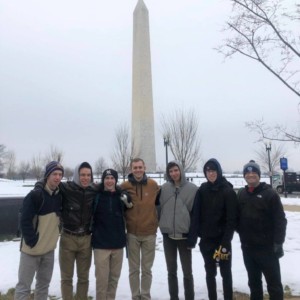 Christian Brothers Academy (CBA) senior Alec Noe was among the students in attendance. “The March for Life was a great experience for us as CBA students, as it reinforced the strong conviction to Catholic beliefs and morals. The trip to D.C. also allowed the CBA community to form a meaningful connection with other Lasallian schools from across the country.”

Alex Hartman, a senior from St. Joseph’s Collegiate Institute remarked, “One of the speakers noted that the most dangerous place in America is in the womb. Something about the backwardness of that really struck me. The March for Life is unique in that you aren’t marching for yourself; you’re marching for the millions of unborn babies who have no voice. What’s really special is the overwhelming amount of young people who show up at the march, many of them bearing signs that read ‘We are the pro-life generation.’”

Sixty-six people from four schools gathered together after the march for dinner and prayer hosted at St. John’s College High School.