Students throughout the Lasallian Region of North America are invited to participate in the El Otro Lado program hosted by Cathedral High School in El Paso, Texas. 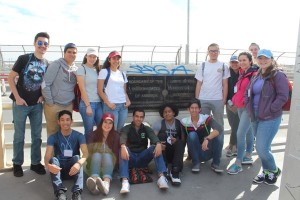 El Otro Lado El Paso is a five-day immersion program that provides participants with an opportunity to experience and explore the El Paso and Ciudad Juárez borderland. El Otro Lado exposes participants to border issues, including youth at risk, unaccompanied minors, political asylum seekers and human trafficking. Participants learn about the unique culture of El Paso and Ciudad Juárez, interact with people in the borderland, listen to their stories, and share in the experiences of their day-to-day lives.

The El Otro Lado immersion programs are supported as needed by the Lasallians Without Borders Committee, a collaboration between the Districts of San Francisco New Orleans and North Mexico. The Districts created the committee in response to the call of the 45th General Chapter to go “beyond the borders” of our consciousness to get a better understanding of those living along the margins. The committee’s goal is to educate and sensitize Lasallians to issues related to migrants, immigration and refugees.

Cathedral High School is accepting reservations for six sessions to be held during the 2016-2017 academic year. The deadline to reserve space is June 3, 2016. For more information, email Sheila Garcia.