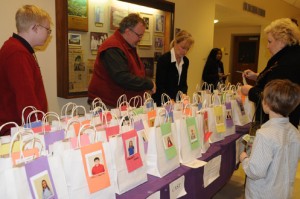 CBA’s Parents of Talented Teens group sponsored “Wishes for Kisses” to raise money during four fall performances of Godspell Jr. Showgoers were encouraged to purchase a “wish” in the form of a handwritten congratulatory note and Hershey’s “kisses” for cast and crew members. The project raised $250, which was sent to Loughlin. Additionally, Loughlin held a dress down day to raise funds for storm victims and combined its proceeds with those from CBA to directly benefit those most in need in the New York area.

The District of Eastern North America also collected donations to help Lasallian families cover education costs as they worked to get life back to normal.