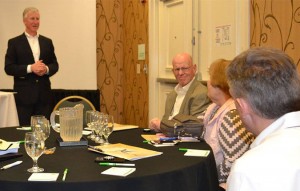 Like past years, LASSCA featured keynote addresses, breakout sessions and time to network with other Lasallian educators. New to 2016 was “Wine & Wisdom” which placed attendees from across the Districts in groups to discuss experiences and challenges in four broad areas facing our communities generally, and our Lasallian schools in particular. Topics touched on included Canon Law, LGBTQ issues, reflecting on the opening session keynote address about “forming disciples” and immigration issues. Many participants noted that this addition to the conference was a highlight for them. 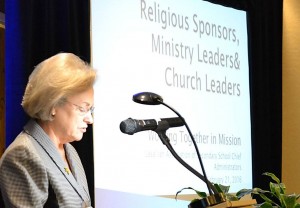 Another notable event was the annual presentation of the Brother Michael Collins, FSC Award. This award recognizes the students, alumni, parents and supporters of a singular program from the more than 50 Lasallian secondary schools in North America. The 2016 recipient was the Swing Choir from Saint Joseph’s Collegiate Institute (SJCI) in Buffalo, New York.

Remarking on what he would take away from this year’s LASSCA, Brother Gale Condit, FSC, president at Archbishop Rummel High School in Metairie, Louisiana, said “The main speakers shared ideas that were well researched and most meaningful in today’s world. This LASSA conference was well organized in terms of goals, timeline, group discussions and guest speakers.”

LASSCA 2016 breakout sessions gave participants a chance to discuss both longstanding and newer challenges faced by administrators and educators. Topics included: working together in mission, teaching underserved and immigrant children, legal implications surrounding social media use, the connection between governance and advancement, the Affordable Care Act, and LGBTQ issues.

Each day included ample time for association in the forms of prayer, socials, dinners and discussion.

The next LASSCA conference will take place February 26 – March 1, 2017, in Orlando, Florida.