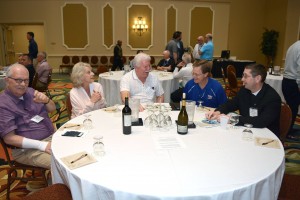 The Lasallian Association of Secondary School Chief Administrators (LASSCA) held its 13th annual conference February 26 – March 1, 2017, at the Rosen Plaza in Orlando, Florida. Principals, presidents, board members, District and Regional leaders and others gathered to discuss topics related to this year’s theme: “Lasallian Leadership in a Rapidly Changing Culture.”

As in years past, the conference included keynote addresses, breakout sessions, plenty of time for discussion, Mass and prayer, District and group dinners, and the presentation of the Brother Michael Collins Award of Excellence, which was awarded to the Lasallians Helping Lasallians program at Mullen High School in Denver, Colorado.

Read more about the award recipient and opening night > 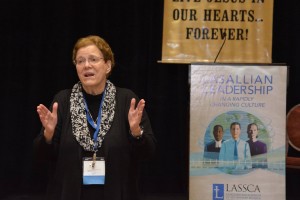 The first full day of the conference began with prayer and the annual LASSCA business meeting. The opening keynote address, entitled “Thorny Legal Issues in Catholic Education and How to Address Them,” was given by Sister Mary Angela Shaughnessy, SCN, J.D., Ph.D., an attorney at law and education law consultant at Loyola Marymount University in Los Angeles, California.

After listening to Sister Mary Angela’s address, James Benson, principal of DeLaSalle High School in Minneapolis, Minnesota, commented, “It was important to look at these ‘thorny’ issues and legal problems because it is key to this year’s theme – our ‘rapidly changing culture.’ These kinds of discussions allow us to be ready to respond to a number of things that can happen on any given day at our schools.” 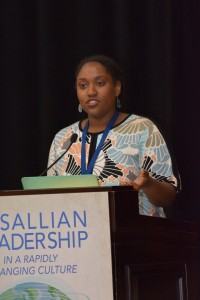 After a break to visit exhibitors, participants gathered again for the day’s second keynoter, Marcia Chatelain, Ph.D., who is an associate professor of history and African American studies at Georgetown University in Washington, D.C. Her address, “Leading Our Catholic Schools Toward Racial Justice: Overcoming Our Fears, Using Our Values,” created thought-provoking moments for the group.

“Dr. Chatelain’s speech was mind-expanding,” said Edward Dana, chief executive officer of Martin de Porres School in Elmont, New York. “She gave us, as educators, specific steps and directions to begin to have this so important discussion (about race) in our own schools.” 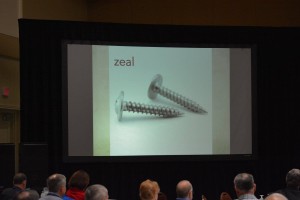 On Tuesday, the group listened to “Honoring the Person While Facing the Challenge: Tips for Talking in Times of Change” by Ann M. Garrido, D.Min., an associate professor of homilitics at the Aquinas Institute of Theology in St. Louis, Missouri. First-time LASSCA attendee Armando Valenzuela, principal of San Miguel High School in Tucson, Arizona, commented on how Garrido’s use of visuals helped him to envision some best practices to take home.

“She put up this image of two screws and to me it represented how as Catholic schools, sometimes we can get stuck in tradition and feel like we’re not making change,” said Valenzuela. “But if we envision ourselves as the screw going into the wood – maybe we aren’t moving laterally, but we’re still in movement.” 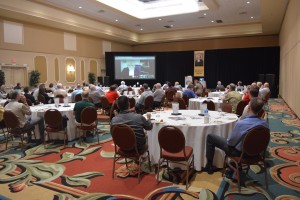 LASSCA 2017 wrapped up on Wednesday with Ash Wednesday Mass and a keynote address from Brother Superior General Robert Schieler, FSC, via video conference from Rome.

“Brother Robert inspired us. His focus on the importance of leadership, rather than being consumed by our management responsibilities, created a lot of discussion among the participants,” remarked Gary Cannon, principal of Sacred Heart Cathedral Preparatory in San Francisco, California. “He reminded us of the need to be prayerful, reflective and conscious of God’s presence everywhere and in everyone.”

The next LASSCA Conference will take place February 25-28, 2018, again in Orlando, Florida.