LASSCA 2017 Kicks Off in Orlando

The 13th annual Lasallian Association of Secondary School Chief Administrators (LASSCA) Conference, themed “Lasallian Leadership in a Rapidly Changing Culture,” got underway on Sunday, February 26, 2017, in Orlando, Florida. Throughout the next few days, leaders of Lasallian secondary schools will listen to keynote speakers, join together for table discussions, gather for breakout sessions, and more.

The conference began on Sunday with all participants coming together for Mass, celebrated by Father Paul Novak, OSM, president of De La Salle Institute in Chicago, Illinois. After Mass, the opening general sessions began with welcoming remarks from the LASSCA President Brother James Butler, FSC, president of La Salle College High School in Wyndmoor, Pennsylvania, and Mark Freund, executive director of the Office for Lasallian Education at Christian Brothers Conference. 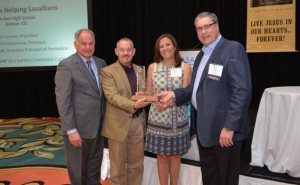 “You have to have the vision to see things in a little bit of a different light and then ask. That’s how I knew there was a need,” explained Schuhardt on how seeing the need of one student at Mullen sparked the idea for the Lasallians Helping Lasallians Program. “Because of the business of our lives, we don’t always see. But as Lasallians, we have to take that extra step and check.” 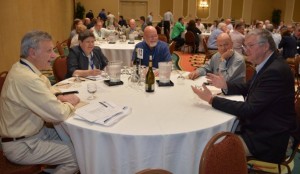 Opening night also included a “Wine and Wisdom” session, which gave participants from across the Region’s Districts the chance to discuss questions presented to them by facilitators. The evening ended with a social to allow leaders time to build association.

“One of the highlights for me of attending the LASSCA meeting is always the community, both professionally and spiritually,” said Brother John Montgomery, FSC, principal of Cathedral High School in Los Angeles, California. “This is an opportunity to come together to deal with the issues that we face as chief administrators in assisting youth, but it’s also invigorating and inspiring to be with fellow Lasallians who care deeply about the personal, academic and spiritual growth of our students.”