The 14th annual Lasallian Association of Secondary School Chief Administrators (LASSCA) Conference, themed “Lasallians Without Limits: Overcoming the Barriers to Success,” got underway on Sunday, February 25, 2018, in Orlando, Florida. Throughout the next few days, leaders of Lasallian secondary schools will listen to three keynote speakers, participate in table discussions, gather for breakout sessions, and more. 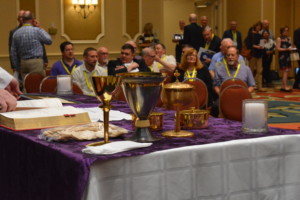 The conference began on Sunday with all participants coming together for Mass, celebrated by Father Paul Novak,OSM, president of De La Salle Institute in Chicago, Illinois. After Mass, the opening general sessions began with welcoming remarks from the LASSCA President Cheri Broadhead, principal of Totino-Grace High School in Fridley, Minnesota, and Mark Freund, executive director of the Office for Lasallian Education at Christian Brothers Conference.

When asked what he hoped to gain from this conference, second-time LASSCA attendee, Christopher Themistos, principal at St. John’s College High School in Chevy Chase, District of Columbia, said, “I underestimated the relationships I made last year and how much I was looking forward to connecting again. It is wonderful to come together and hear about our successes and talk about how we can lean on each other – the concept the Brothers have of ‘together and by association’ does give us strength moving forward.” 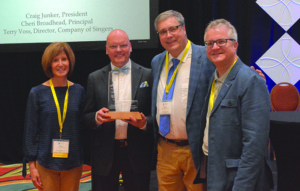 The annual Brother Michael Collins Award of Excellence was presented to Mr. Terry Voss of the Company of Singers at Totino-Grace by Barry Lieske, AFSC, president of DeLaSalle High School, Minneapolis, Minnesota. This award was created to honor the legacy of Brother Michael, former president of DeLaSalle High School in Minneapolis, Minnesota, who passed away in January 2012. It recognizes excellence in a Lasallian secondary school program that represents admirable values, standards and passions.

“The choral group provides a safe atmosphere for students who can come in and feel welcomed,” explained Voss, on the importance of the Company of Singers at Totino-Grace.

After the award presentation, participants took part in a “Wine and Wisdom” session, which gave them the chance to discuss questions, such as “What is the most successful initiative you’ve implemented that has allowed a marginalized group in your school to have a meaningful voice?” 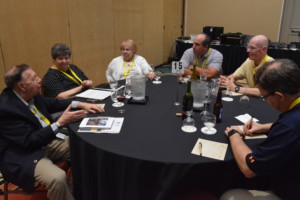 “What I enjoyed about ‘Wine and Wisdom’ is, I am a first-year principal, and this is my first time at the LASSCA Conference, so I enjoyed just sitting with my group and hearing the collective wisdom of those who have been doing this for years and who were able to offer some insight into things they are doing at their schools that I can use down the road,” remarked Richard Neider, principal of Christian Brothers School, Canal Street Campus, in New Orleans, Louisiana.