The Lasallian Association of Secondary School Chief Administrators (LASSCA) held its 14th annual conference February 25-28, 2018, at the Rosen Plaza in Orlando, Florida. Principals, presidents, board members, District and Regional leaders and others gathered to discuss topics related to this year’s theme, “Lasallians Without Limits: Overcoming the Barriers to Success.”

The conference included keynote addresses, breakout sessions, plenty of time for discussion, Mass and prayer, District and group dinners, and the presentation of the Brother Michael Collins Award of Excellence, which was awarded to Mr. Terry Voss, who leads the Company of Singers at Totino-Grace High School in Fridley, Minnesota.

Read more about the award recipient and opening night >

The first full day of the conference began with prayer and the annual LASSCA business meeting. The opening keynote address, entitled “What Got Us Here Won’t Get Us There: Best Practices to Reach and Effectively Meet the Changing Emotional Needs of Our Students,” was given by Roy Petitfils, MS, LPC, a counselor, speaker and author from Lafayette, Louisiana. Petitfils spoke about many of the critical issues facing today’s young people, including anxiety, depression and suicide.

After listening to the keynote address, Ana Hernandez, first-time LASSCA attendee and principal of Cristo Rey De La Salle East Bay High School (CRDLS) in Oakland, California, which will open in the fall of 2018, commented, “Roy Petitfils’ presentation was an affirmation to the program we are developing at CRDLS. It was a humble reminder of our responsibility to our students and their needs. We are committed to creating a program that addresses our students’ sense of purpose, agency, wholeness and self-authoring so that they are equipped to thrive in such a complex world.” 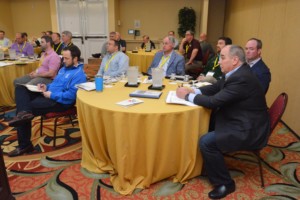 The rest of the day was filled with lunch, chances to visit exhibitors, and two rounds of concurrent breakout sessions. Session topics included educational formation in an age of technology, Lasallian pedagogy, legal issues, and relationships between administrators, board members and parents. District dinners took place in the evening.

On Tuesday morning, Robert Scott, AFSC, president of St. Joseph’s Collegiate Institute in Buffalo, New York, addressed participants and suggested writing a statement on behalf of LASSCA in support of all young people in response to the recent school shooting in Parkland, Florida, and all violence in schools. During the day, other participants joined Scott to help craft a statement, which was approved during Wednesday’s general session.

Before the approval of the statement, Ed Bernot, principal of the newly affiliated Saint John Paul II Academy in Boca Raton, Florida, stated, “Yesterday I spoke with my students who are organizing how they can continue to support their friends and the Parkland community. Many of our students at Saint John Paul lost friends and have been connected to this tragic event from the beginning. It was one week ago today that we were formally welcomed into the Lasallian family and my students were excited about this and asked me, ‘So what does this really mean?’, and today by you making this statement here at LASSCA, I can say to my students, ‘This is what it means to be part of this family.’ Thank you!” 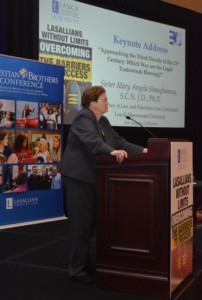 “Sister Mary Angela is a wonderful individual, and she challenges us to look at the changes in our society, really listen to our kids and try to provide them with the best and safest environment,” said O’Neill. “We need to direct them to being good Christians, but also to be knowledgeable and understanding of how our society is changing and how it affects them.”

Tuesday afternoon featured meetings by District and forums for presidents, principals and board members. Tuesday evening featured a poolside social. 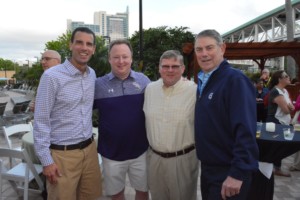 “Brother Louis has been very challenging in his talks at the LASSCA conferences over the past couple of times he has been here,” said Don Kavanagh, executive vice president and principal of La Salle Academy in Providence, Rhode Island. “Today I thought he was extremely challenging in terms of presenting topics to us that we are facing everyday anyway. He just shed light on them and has given us a lot of things to think about as to how we proceed when we get back to our individual schools. I just loved the presentation – it was great!”