LASSCA 2019 Kicks Off in Houston

The 15th annual Lasallian Association of Secondary School Chief Administrators (LASSCA) Conference got underway on Sunday, February 24, 2019, in Houston, Texas, with the theme “One Heart. One Commitment. One Life.” During the conference, which lasts until Wednesday, Lasallian secondary school leaders will hear from four featured speakers, gather for breakout sessions, meet with other members from their Districts and more. “One Heart. One Commitment. One Life.” is also the theme of the Year of Lasallian Vocations, which began December 2, 2018, and will end November 24, 2019. 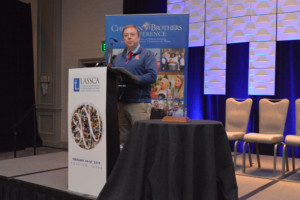 The conference began on Sunday with Mass at St. Michael the Archangel Church. After Mass, the opening general session began with welcoming remarks from LASSCA President Pro Tem Andrew Kuffner, who is president/principal of La Salle Catholic College Preparatory in Milwaukie, Oregon, and Mark John Freund, executive director of the Office for Lasallian Education at Christian Brothers Conference.

Robert Lundy, principal of De La Salle College “Oaklands” in Toronto, Canada, is a first-time LASSCA attendee. When asked what he hoped to gain from the experience over the next few days, he said, “Although I work in Canada, what I’ve noticed in speaking to Lasallians from all over North America is that we want the same goal—student success. It’s a difficult time to be a teenager right now. There’s a lot of pressure on them and what we want to do as educators is make sure we provide a safe environment that can bring out their best. I’m hoping over the next few days to just be a sponge and soak in more information.” 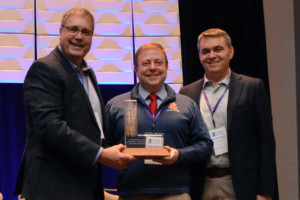 Kuffner and Matthew Winningham, executive director/chief financial officer of La Salle Catholic College Preparatory accepted the award on the school’s behalf. Commenting on the students in the San Miguel Scholars Program, they remarked, “Many of these amazing students come to La Salle from urban areas and bring with them the diversity of backgrounds that truly enriches our community every day, through their courage, optimism, perseverance and unique perspectives and life experiences.”

After the award presentation, participants took part in a “Wine and Wisdom” session, which gave them the chance to discuss the question, “What are your biggest challenges and concerns?” The participants were placed in groups according to the role at their ministry across District lines. 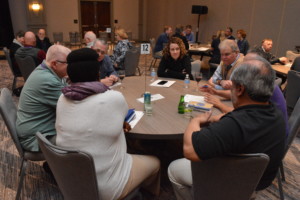 “What I enjoyed about ‘Wine and Wisdom’ was the chance to connect with other Lasallian principals from across the country, talking not just about the professional challenges we face, but also the personal ones. What it means to be a principal—it can be such a joy but it can be tough! We are united in how we connect together through the Lasallian mission,” remarked Susan Skinner, principal of Benilde-St. Margaret’s School in St. Louis Park, Minnesota.

Featured speakers for LASSCA 2019 include: Karen Eifler, Ph.D., Garaventa Center co-director and School of Education professor at the University of Portland in Portland, Oregon, on Monday; Tom Gartland, author, speaker and leader from Minneapolis, Minnesota, and John Nicoletti, Ph.D., ABPP, police psychologist from Nicoletti-Flater Associates in Denver, Colorado, on Tuesday; and Brother Robert Schaefer, FSC, Secretary Formation for Mission, Institute of the Brothers of the Christian Schools in Rome, Italy, on Wednesday.