The Lasallian Association of Secondary School Chief Administrators (LASSCA) held its 16th annual conference February 23-26, 2020, at the JW Marriott Houston by The Galleria in Houston, Texas. School administrators, board members, District and Regional leaders and others gathered to discuss topics related to this year’s theme, “Sustaining Excellence in Lasallian Leadership.” 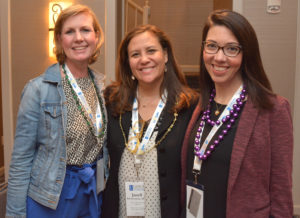 Kerry Conroy, principal of LaSalle Academy in New York, New York, shared how valuable she found her time at LASSCA to be. “I always enjoy coming to LASSCA because of the networking, the connection to the greater Lasallian community, and the valuable information I gain on current issues affecting our students. I know that I can reach out to any one of the attendees at any time as a source of support and a wealth of information!”

Dr. Peter Imperial, principal of Saint Mary’s College High School, accepted the award on the school’s behalf. Commenting on the Inclusive Community Initiative, he remarked, “We have been working with the Inclusive Community Initiative, developing it for five years. We are breaking down misunderstandings, giving a voice to those that are not heard. Saint Mary’s College High School wants to engage the whole community, by building empathy and understanding.”

The first full day of the conference began with prayer and a keynote address entitled “Lasallian Education: Following in the Footsteps of the Greats” by Reverend James P. Burns, IVD, Ph.D., president of Saint Mary’s University of Minnesota. Father Burns shared his perceptions of the many wonderful things taking place in our collective educational ministries. The participants were placed in groups according to the role at their ministry across District lines to discuss what they took away from the keynote address.

The rest of the day was filled with District meetings, opportunities to visit exhibitors and open forums. District dinners took place in the evening. 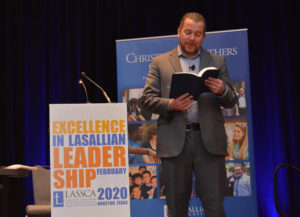 After the meeting, a keynote address was given by Dr. Tim Uhl, superintendent of Montana Catholic Schools in Helena, Montana. His speech was entitled “Finding a Way.” Drawing on his experience as a school and system leader, Dr. Uhl linked Gospel stories to the challenge of leading the doubtful who often doubt the leaders.

Frank Miley, president of Cretin-Derham Hall in Saint Paul, Minnesota, gained new insight from the breakout sessions. “My biggest two takeaways this year came from the breakout sessions, financial sustainability and enrollment management. The information and resources are data-driven and innovative. I look forward to showing these to everyone when I get back to school.”

LASSCA 2020 wrapped up on Wednesday with a final keynote address entitled “¡P’alante! Together We Can Do Great Things” by Melodie Wyttenbach, Ph.D., executive director of Roche Center for Catholic Education Lynch School of Education and Human Development at Boston College in Chestnut Hill, Massachusetts.

The next LASSCA Conference will take place February 28-March 3, 2021, at the Rosen Plaza in Orlando, Florida.