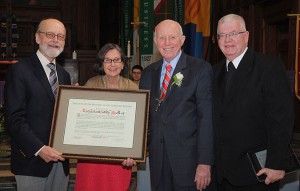 Longtime supporters of St. Mary’s Secondary School and Child Rescue Centre in Nyeri, Kenya, a ministry in the twinning program, have received the highest honor the Institute of the Brothers of the Christian Schools can bestow on lay people, making them honorary members of the Institute.

Mr. Richard McKay and Mrs. Judith Thompson McKay received Letters of Affiliation (AFSC) in a ceremony at Manhattan College in Riverdale, New York, on April 8, 2017. The McKays were recommended for affiliation by the Brothers’ communities of St. Peter’s Boys High School in Staten Island, New York, and St. Mary’s. The McKays were honored for their unwavering dedication and fundraising for the programs at St. Mary’s, raising more than $2 million over more than 10 years.