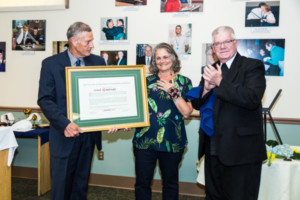 Moscinski has provided more than 30 years of service to the young men and staff of LaSalle School. The immediate past executive director, Bill Wolff, AFSC, commented in his recommendation of Moscinski for affiliation, “Anne has some form of liquid empathy running through her body that not only guides her interactions with everyone she meets, but also seems to nourish her and allow her to sustain her energy beyond normal limits. Her commitment to our youth and families is obvious, but her true concern and compassion for staff is an amazing thing to observe. She works, and works, and then works even more, to make their jobs more doable and their lives more complete. And she does all of this with little interest in drawing attention to herself.”