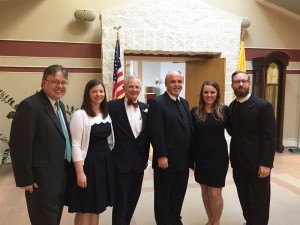 In the company of Brothers, family and friends, William H. Phillips was presented with the Letters of Affiliation (AFSC) by Brother Superior General Robert Schieler, FSC, at La Salle Hall in Beltsville, Maryland, on May 7, 2016.

Phillips’ commitment to the District of Eastern North America (DENA), Lasallian Volunteers (LVs) and the Lasallian Region of North America (RELAN) was highlighted during the ceremony. Phillips has been associated with the Brothers since he attended Calvert Hall College High School in Baltimore, Maryland, and spent three years in initial formation. Since then, he has served on numerous DENA committees, including serving as the chair of the Investment Committee, which is responsible for the future well-being of the Christian Brothers, especially those in retirement and continued care.

Phillips served for five years on the Lasallian Volunteers Advisory Board, and he founded and chairs an independent organization, the Friends of Lasallian Volunteers, formed with the permission of the Visitors to pursue legacy gifts for the LVs. On the corporate level, he is the D.C. registered representative of the Visitors’ civil corporation, Christian Brothers Major Superiors, Inc.